You are at:Home»Current in Carmel»Carmel Education»Carmel parent gives thanks with artwork 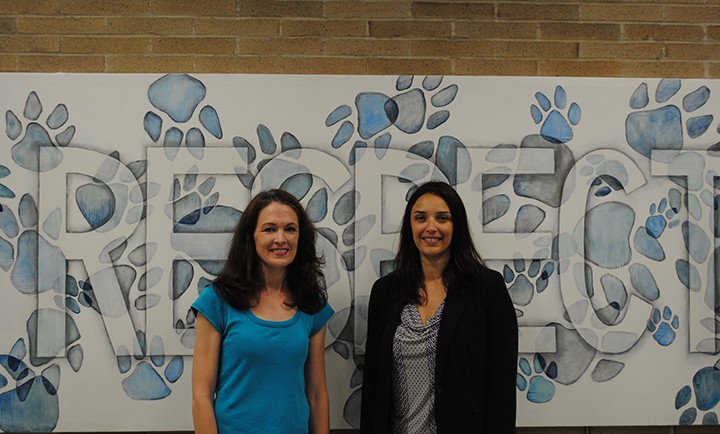 Carolyn Martens has a unique and lasting way to contribute to her children’s schools.

Martens recently completed a mural for Carmel Middle School, showing the word Respect around different size of Cougar paw prints to represent the students, parents and teachers. A cougar is the school’s mascot name.

“It’s my way of saying thanks to each school they’ve gone to,” Martens said. “We’ve moved around a lot and Carmel Clay Schools system is far superior to anything else we’ve seen so it’s my personal tradition of giving back. I do a lot of the other volunteer stuff but this to me is a more permanent and lasting.”

Martens, 43, has a sixth-grader at CMS and children in third and fourth grades at Cherry Tree Elementary.

Martens previously did a painting for Cherry Tree, an abstract flag landscape since Cherry Tree’s nickname is Patriots.

CMS Principal Lila Jay said the mural is placed in a part of the school near the auditorium and gym, which is frequently populated by visitors for concerts and games. Jay suggested the theme for the mural when Martens offered to do a custom painting for the school.

“Our big positive behavior strategy is Cougar Respect,” Jay said. “We talk to our students all throughout the year about being respectful in a lot of different capacities.”

Martens and her family moved to Carmel from Charlotte in 2008. They moved to Chapel Hill, N.C., for her husband’s job in 2012 but returned to Carmel in 2014.

Martens, an artist for ArtSpalsh Gallery, 111 E. Main St., will have a show at the gallery in June. Martens, who primarily does oil paintings, does her painting at home.

Martens was an art major at the University of North Carolina, where she attended on a volleyball scholarship. Her husband Rob competed on the Tar Heels track and field team. Martens, a Colorado native, worked in the corporate advertising world before transitioning to being a full-time artist in 2003.