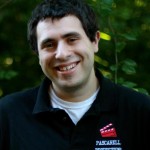 Eric Pascarelli, a 2007 graduate from Carmel High School, is the founder and owner of Pascarelli Productions, a video production company based in Carmel.

Pascarelli studied telecommunications at Ball State University and graduated in 2011. In 2012 he started his business and has since served clients such as Angie’s List, WGU, Mainsource Bank, and Children’s Dentistry of Indianapolis, to name a few.

Pascarelli credits his passion for video production blossoming at Carmel High School. “After doing my first video project in my sophomore year in high school, I realized that is what I really wanted to do. It was great to have the opportunity to go to a high school where these classes were offered. I know many schools around the state do not have the multitude of electives Carmel offers,” he said.

Throughout his college tenure at Ball State, Pascarelli was engaged in various freelance video projects outside his daily coursework, some of which continued after graduation. The more projects that arose, the more he believed that this could be a viable career path. Since starting his company in 2012 he has gone “all in” and hasn’t looked back, he said.

Pascarelli knew he wanted to base his business in Carmel as he has fallen in love with the city since he moved here from New York with his family almost 16 years ago. Although a drastic change from New York, Eric has a great appreciation for the community of Carmel and all it has to offer.

“Not only is it a safe city for families, it has also become a great place for people in my generation. In recent years, it seems Carmel has made a big effort in attracting local artists and galleries to downtown, which never fails to give me inspiration for my videos. In regards to my business, it is in a prime central location since many of my video shoots happen throughout the state,” he said.

Currently, Eric is the only employee at his company, but he hopes this changes in the next few years as Pascarelli Productions expands.

If you’re in the market for a video production company that provides a personable approach and great communication, he said, contact Pascarelli Productions.