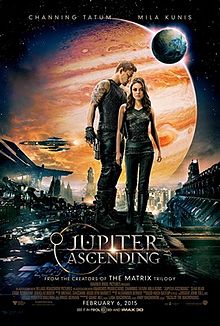 One of the largest box office bombs in recent memory, “Jupiter Ascending” just may mark the end of big-budget filmmaking by the Wachowski siblings. After lighting up imaginations and accountant spreadsheets with “The Matrix,” the Wachowskis have failed to capture lightning in a bottle again.

Mila Kunis and Channing Tatum are two underwhelming performers, and their combination yields exponential results in sheer thespian dreadfulness. She is Jupiter Jones, lowly maid who turns out to be the inheritor of the Earth – literally – who’s being hunted by her family (sorta), an all-powerful galactic clan who harvest entire planets for the life essence of the inhabitants.

He is Caine Wise, a disgraced military man-turned-bounty hunter, who becomes Jupiter’s protector and, inevitably, romantic interest. It’s essentially one big chase story, with Jupiter being repeatedly kidnapped and rescued by the various warring factions.

There’s a plethora of cool, bizarre creatures, but they’re here and gone so fast they barely have time to register. Similarly, the action scenes are filled with nifty CG special effects, but are staged confusingly.

“Jupiter Ascending” is the sort of disaster that is best experienced as unintentional comedy. Invite some friends over for some “Mystery Science Theater 3000”-style spoofing.