You are at:Home»Current in Fishers»Fishers family takes action to discourage discrimination 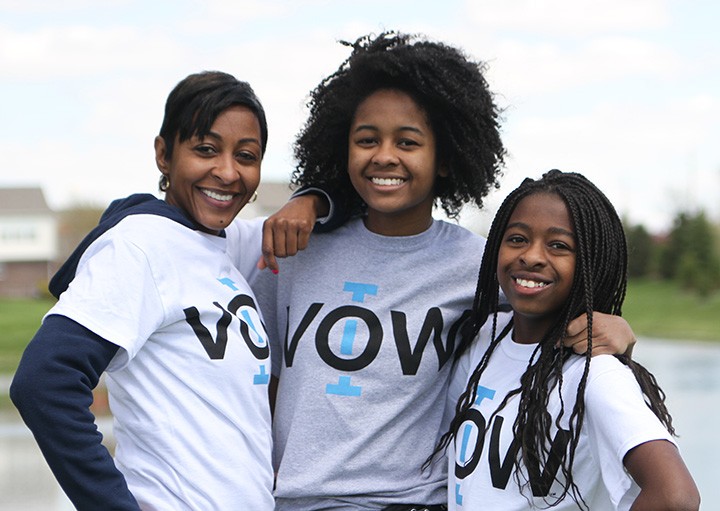 One Fishers family has set out to increase awareness and foster a commitment within the community to promote respect and discourage discrimination. Latisha Johnson and her daughters Nailah Owens-Johnson and Nishara Johnson have started a pledge they call I VOW in honor of Latisha’s late husband, Caruis, who unexpectedly died nearly three years ago as a result of a brain aneurysm.

“I VOW is a two-part passion. It’s Nailah’s passion and my late husband’s passion,” said Latisha. Her husband was impassioned with educating people regarding diversity. “Nailah has always had the passion to see people work together in unity, respect one another and treat everybody right.”

Nailah is a junior at Hamilton Southeastern High School. At the beginning of the year, she started a club called DO Something. This month, the school principal approved the club’s request to promote the I VOW pledge school wide with students and staff. Latisha said that the goal is to encourage supporters to reaffirm their pledges on an annual basis.

The women have taken their pledge to social media, starting up profiles with Facebook, Twitter and Instagram. One current campaign challenges followers to “pass the torch” by joining the movement and challenging others to take the I VOW pledge. Nailah and her classmates have even initiated a special hand symbol to represent the pledge.

Latisha hopes to encourage others to take action. “I VOW is not political or religious. It’s just a moral that we’re asking people to take a pledge to show respect. We are a family that is doing something about what is going on in our world today by creating the I VOW movement. It’s not just a promise; it’s a vow, a lifetime commitment.”

The family invites the community to join them on social media and email them at ivowmovement@gmail.com for more information about the I VOW movement.