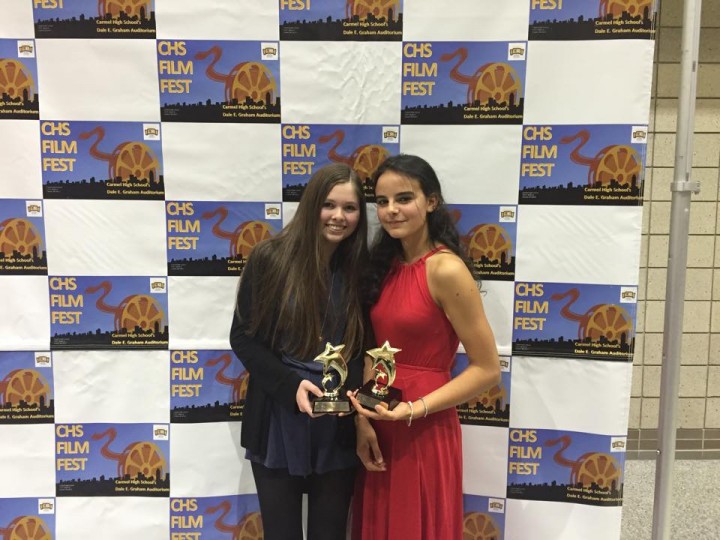 This time last year Clara Martiny and Daphne Hulse didn’t know each other. Martiny lived in China, Hulse in Carmel.

But a chance pairing by a school counselor after Martiny moved to Indiana has led to a friendship that resulted in the duo pairing up to enter – and win – a short film contest at Carmel High School.

“Clara moved here in August and the counselor had me show her around school,” Hulse said. “It was awkward at first but we got to know each other and had a lot of similar interests so that was cool and we definitely clicked.”

Clicked and became good friends. So when Martiny happened to see an announcement at school one morning this past winter about a film festival she had an idea. The only catch – the deadline was fast approaching – they had just a month to shoot and edit the film.

“I went home and thought about it and knew Daphne was a great director and film maker and I’m an actress so I texted her about it around 11 p.m. and asked if she wanted to do it,” Martiny said. “She was interested and by 1 a.m. we had a general idea of what we wanted to do.”

That general idea resulted in “Insomnie” – a short film in French. The premise – a teenager struggling with drug abuse since her brother’s death. “What she doesn’t foresee is the impact that the substance has on her. No longer is she able to view the good in life.”

“We wanted to do something very dramatic that would catch the eye and be not quite the norm – something more original,” Hulse said.

On May 1 the filmmaking team found out they’d won Best Film Overall and a prize of $500, beating out seniors at their school, as well as films from other schools around the state. They also won Audience Choice Award with a $100 prize, and Hulse won for best cinematographer.

That message was “Dedicated to anyone who feels alone.”

“When I first moved here I had Daphne but it really was hard because school had already started and as the months went by I went through a lonely phase and I didn’t like it all,” Martiny said. “I don’t ever want to go through that again and I don’t want to see other people suffering. Mine was just surface level but I know others have deep depression or self-harm and so I think it’s important to let people know they are loved.”

As for their plans for the future, the freshmen are looking for film festivals to enter and already planning their film for next year’s contest at the high school.

“We received a lot of good feedback and know how to improve,” Hulse said. “We have a better idea of what to do for next year and think it will be even better.”