You are at:Home»Current in Carmel»Carmel Education»Carmel High School reveals statistics with social media 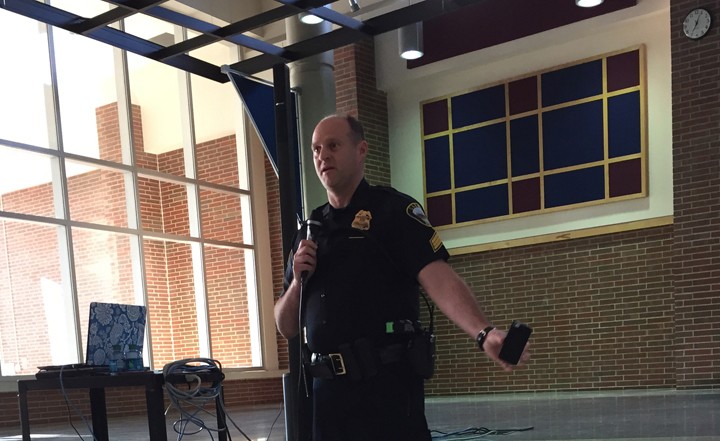 On the evening of April 30, CHS Assistant Principal Karen McDaniel and Sergeant Phil Hobson with the CPD gave a presentation about social media to the parents of CHS students.

A few videos were shown, mostly depicting the results of “sexting,” or sending nude or inappropriate pictures, between teens. Sgt. Hobson explained how quickly the situation can get out of control. Although it may not be their intention, the teen who send or received the inappropriate picture can be charged with production or possession of child pornography.

“As you can imagine, it is impossible to control once it gets started,” Sgt. Hobson said. “Child exploitation is one of the laws we deal with pretty frequently. Once that image is out there, it is nearly impossible to delete.”

The CPD has seen instances as young as students in fifth grade. Sgt. Hobson said that the victim not only deals with their picture being available to almost anyone via the internet, but they also deal with harassment and intimidation from peers.

With the advancement of technology, students now have more and more ways of accessing mobile apps that are dangerous. These apps not only promote sexting, but anonymous bullying as well. There is a website, www.safesmartsocial.com that provides parents with an app guide about whether their child’s mobile applications are good or bad. The website ranks the apps with a thumbs up, a gray area, or thumbs down.

McDaniel explained that social media can be good or bad for employment opportunities as well as college acceptance. Some instances, with students displaying responsibility over LinkedIn and Facebook can be good, yet other instances can deter an employer’s or college’s decision.

“I do encourage you to check your student’s phone,” McDaniel said, “it is a privilege for them, not a right.”