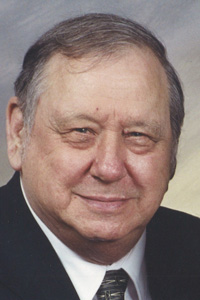 H.D. Hollingsead, 85, Westfield, died April 25 at Prairie Lakes Health Campus in Noblesville. He was born on June 2, 1929 in Bethlehem, Ill.

His family moved to Westfield before he reached school age. H.D. graduated from Westfield High School in 1947 after attending Union Bible School. He published his own small magazine, The Village News, during his high school years.

While serving as Staff Sgt. in the United States Air Force, he married Dorothy Mae Eads, his high school sweetheart. After his military service, he returned to Hamilton County, working at the Noblesville Daily Ledger for several years as a linotype operator and advertiser. H.D. then took on ownership of The Community Press in Carmel, which published The Booster. Later, he branched into insurance, serving as a Prudental agent for nearly 30 years.

Gospel music was a major focus of his life. He started singing with the Lapel Jubilee Chorus. Through the years, his singing activities have included The Friendsmen Quartet, The Fishermen Quartet, promotion of Gospel concerts, song leader for local churches and most recently, His Purpose. His radio program, “Gospel Music according to H.D.”, ran every Sunday for 30 years. He recorded several CDs, and was a member of the Indiana Gospel Music Association.

He volunteered for the Gideons, and at the time of his death, was an American Legion Chaplain.

He was preceded in death by his wife of 61 years, Dorothy M. (Eads) Hollingsead; his mother, Gladys Louise (Smith) Hollingsead and his sister, Marjorie Hollingsead.