You are at:Home»Current in Westfield»Planning ahead 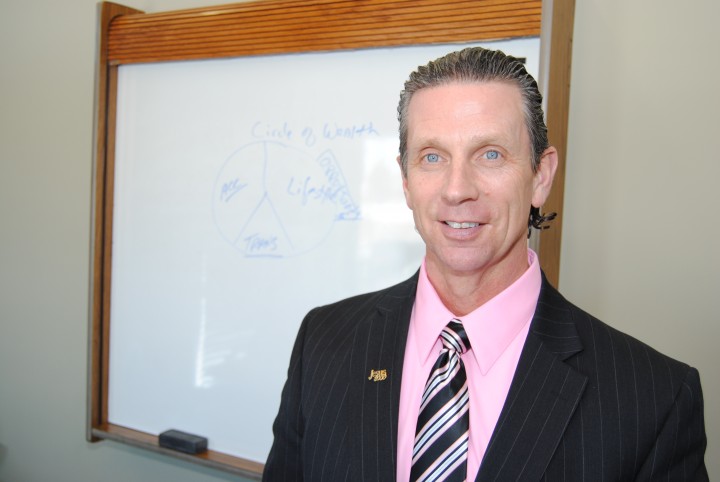 For more than 25 years, Rodney Jones has worked in the insurance business with the goal of helping others. (Photo by Robert Herrington)

When Westfield resident Rodney Jones entered the insurance business 25 years ago, he used to pop motivational cassettes in his car and listened to them when traveling on his way to appointments.

“Zig Zigler was very inspirational on my life,” he said.

Now, Jones is paid to be the same motivator that he once used to take advice from.

“I love what I do,” he said. “When you can help people, that’s one of the greatest feelings in the world. As opposed for years when I was in seniors homes and they can’t even afford to pay to turn the heat on. It’s sad, real sad when you get to those golden years and they struggle to even put food on the table. That’s not the way it should be.”

“I help people find money they are losing unknowingly and unnecessarily, recapture those dollars and bring them back to the table so they can have a more solid financial future,” he said. “I am under the philosophy that if you have the desire to protect your assets, then I have the desire to help you.”

“The reason I like to train professionals is because it fine tunes my game,” he said. “You’ve got to know your stuff when standing up before 50 insurance agents who’ve got more time in the business than you. You better know what you are talking about.”

Jones was raised in a blue collar manufacturing culture where it was normal to graduate from high school and work at the foundry, but he had greater ambitions. Jones attended Southern Illinois University and Butler University.

“What brought me up here was I was attending Butler University in the school of pharmacy. In my last year, which would have been fifth year, I ran out of money. I didn’t have enough money because I was married and had two children so I had to find a way to make some money and start paying back my school loans. That’s when I interviewed for a position with an insurance company.”

Jones said when he first started he didn’t believe the job was for him.

“Growing up, I thought about insurance people as these big, fat chubby guys sitting behind the desk waiting for the phone to ring. You can do it like that but you’ll go out of business,” he said. “Once I got into the business and started meeting with business owners, I loved it. It’s been a great career.”

In 1990, Jones earned his designation of Life Underwriter’s Training Council and began educating clients and professionals on insurance and finances. Since he started, Jones said the industry has changed quite a bit in a couple areas. One example is the government is much more involved in the business and there is a lot more paperwork and red tape we to deal with. There also are a lot more certifications and continuing education.

“When I first came into the business you just had to get your license every two years and pay some money. Well, you’re more professional now to have to stay on top of your studies and education,” he said. “But the core philosophy is the same. What are your needs and what is it you are looking for and we’ll find a way to plug that hole and make it work for you.”

Jones recently joined a group of business experts and entrepreneurs from around the world, along with Brian Tracy, to co-write the forthcoming book titled, “UNcommon: Common Sense but Uncommon Knowledge from ​Today’s ​​Leading ​Entrepreneurs and ​Professionals to ​Help ​You ​Lead an ​Extraordinary ​L​ife of ​Health, ​Wealth and ​Success.”

“Over my years with all this and training all the agents, people kept saying, ‘Hey Rodney, you should write a book.’ You think about it and don’t have time to mess with that and then it hit me one day, ‘Maybe I should get involved with that and leave a little legacy for myself, my business and my children.’ So I carried through with that,” he said. “They took entrepreneurs from around the country and each entrepreneur will speak specifically and do a chapter on what they hone in on the most. My chapter was on protecting your assets, mainly through long-term care insurance,”

Jones also was named as one of America’s PremierExperts and has been selected to participate on several advisory boards of Fortune 500 companies. He balances his time between his clients and educating professionals in his field.

“I’ve met so many people that are retiring or retired and they hardly have enough money to pay their bills. So somewhere along the line something went wrong with the way we were trained on finances and I want to make a difference in people’s lives,” he said. “I love helping people find money they didn’t even know they were entitled to.”

Hobbies: Spending time with family, working out in the gym or on the tennis court and traveling.