You are at:Home»Current in Carmel»Carmel Community»TIF-backed bonds discussed for Midtown 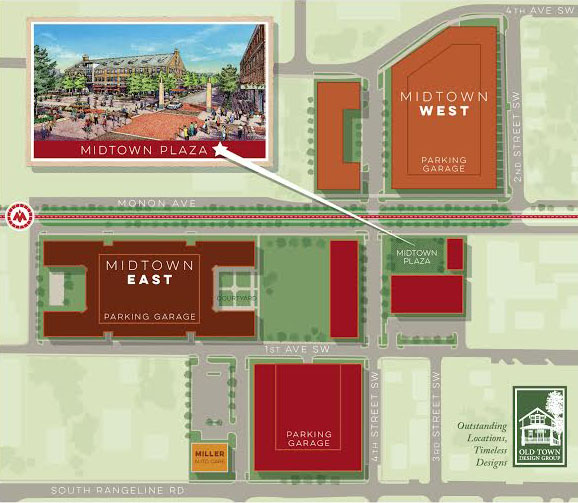 Ever since Justin Moffett, of Old Town Design Group, announced he wants to start on the $130 million Midtown Plan, everyone wants to know: When will it be built?

There is one issue that needs to be decided before any shovels can hit the dirt –financing for a parking garage.

Moffett said the 15-acre office will house several new office spaces, including several corporate headquarters, which means a multi-story garage will be needed to provide parking without a sprawling lot. He plans to use tax increment financing, which is a way to capture increases in property tax values, to help pay for a bond to construct the project.

But there are plenty of questions that need to be answered to start on the project. How much is needed to construct the garage? How many spaces will there be? Will the bond be city-backed or developer-backed? Will there be a TIF split, where the city still receives a portion of the TIF revenue?

Moffett said everything will be decided soon, but he doesn’t expect there will be a problem and that tax revenue from this project will help pay off other municipal debt, such as constructing The Palladium.

“Any increase in revenue is a positive for the city. We all know that,” he said. “So I don’t think the council wants to miss an opportunity to create a TIF district here. It’s our belief that nobody is questioning whether we are TIF-ing the project. It’s just a matter of what’s the split.”

Moffett wants to start on site prep in September and would like to see three of the five buildings under construction by the end of the year.  He said a parking garage takes six months to build. He said it will also take the same amount of time to build a new facility for Miller Auto Care, a business he agreed to relocate when he bought its building. He said both of those can be built before the large office buildings are complete, which can take up to 18 months to finish.

Before anything can begin, he said he needs the Carmel City Council to approve creating a TIF district. So he’s working to present a plan.

“As soon as we start digging, we lose the opportunity to TIF the project,” he said.

He said it’s important to emphasize that there’s plenty of public benefit from constructing the parking garage because restaurants always say they want more lunch business and offices will provide that daytime traffic. But offices require more parking spaces than apartment buildings.

“Our TIF money is virtually gone the day we start because we have to have so many spaces for these offices,” he said.

Moffett said he doesn’t consider using TIF to pay for the bonds to be risky for the city.