You are at:Home»Current in Geist»Sun King opening new taproom 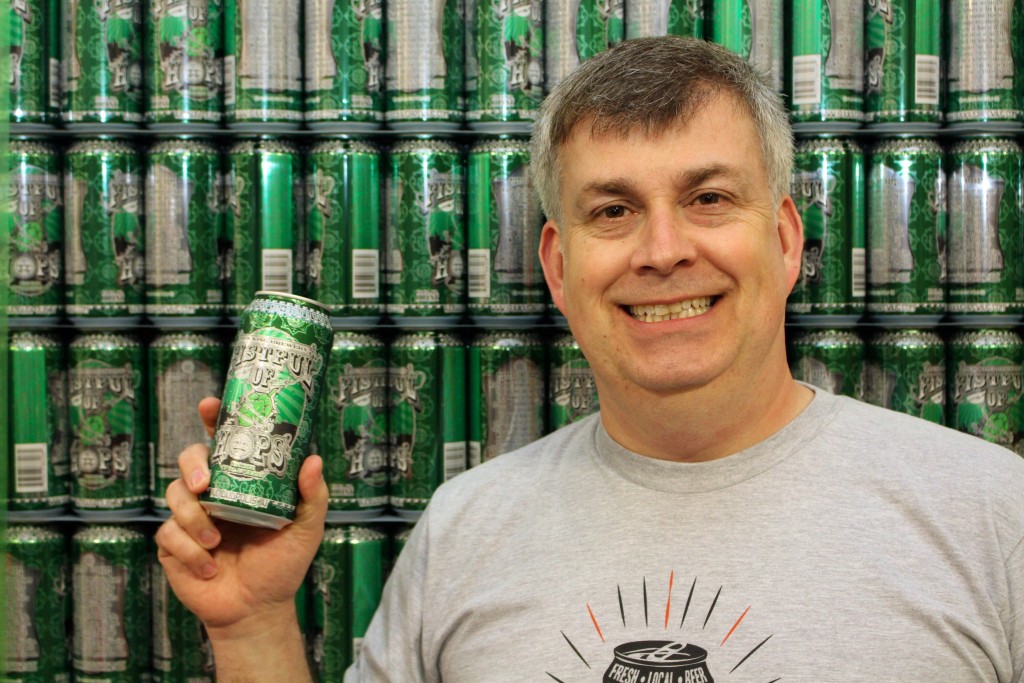 Sun King co-owner Dave Colt shows off one of the company’s craft beers, Fistful of Hops. (Photo by James Feichtner)

When it comes to buying local, Indiana offers quite the selection of items. One locally bought item that has become quite popular in the state is beer. Sun King Brewing is one of the local breweries that’s propagating the beverage here in Indiana, and it’s looking to Hamilton County to expand its reaches.

Located in downtown Indianapolis, Sun King is currently the largest brewery in Indianapolis and the second largest in the state. Recently, the brewery announced that it will be growing its presence in Fishers.

Currently the downtown location has its full-scale brew operation on-site, but also has a small tasting room, or taproom, where patrons can come to sample various year-round, seasonal, and special edition brews. The plan for the Fishers location is just the opposite, focusing more on the taproom aspect with a much smaller brewery in the back.

“The brewery is going to be in the taproom, but the brewery is smaller,” said Sun King Co-Founder Dave Colt. “Like here (Indianapolis), the brewery is massive. It engulfs everything around us, but our taproom here is really pretty small. But there (Fishers) the focus is on the taproom. The taproom itself would be larger than the brewery.”

With their current facility in Indianapolis at max capacity filling the demand for the year-round beers, there wasn’t much room for experimenting with new brew ideas. The taproom will provide Sun King a location to test out new beers and brewing methods.

“There is going to be a pilot-brew system,” Colt said. “What we can make here is 30 barrels, which equals 60 kegs so if we’re doing some one-off specialty products it’s a little bit cumbersome to make that size volume. So having the pilot system at the Fishers taproom is going to allow us to play and experiment with lots of new products and procedures; brew different beers.”

The new location will also allow Sun King to showcase its product to the Hamilton County audience.

“I’ll be splitting my time between both locations, but the thing that I find most exciting is the small pilot system that we can kind of play and showcase some of the more wild and fun things that we’re more capable of doing here at Sun King. And taking that what we do downtown and bringing it to the folks of Hamilton County, and Fishers in particular, and say, “Hey, if you haven’t made it downtown, no worries we’re here.”

The taproom facility will be approximately 6400 square feet with a tasting room and a three and a half barrel brewing system that will be viewable from the tasting area. The location will be at 7848 E. 96th St. Construction is already underway and the facility is expected to be complete by the end of June, with brewing beginning in July.

For more information on Sun King Brewing, visit their website at http://www.sunkingbrewing.com/.