You are at:Home»Current in Carmel»Carmel Community»Is vinyl back? Folks at The Foolery talk quality, sales of vinyl records 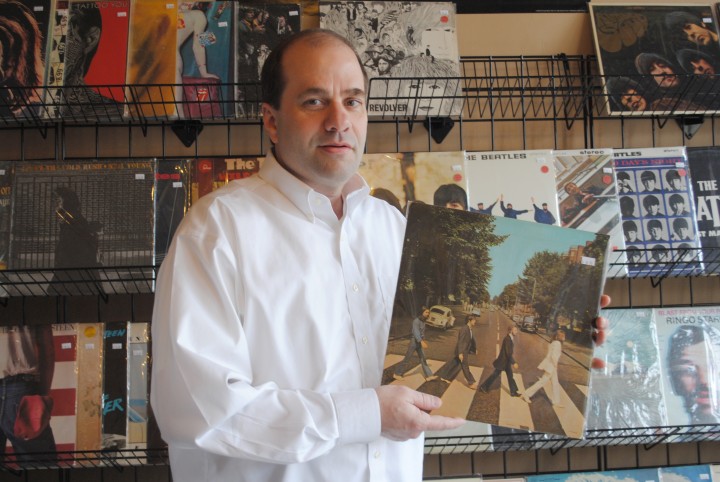 Bob Williams, owner of The Foolery in Carmel.

Vinyl records began their decline in the late 1980s with arrival of the compact disc. By 1991, the 33 1/3 vinyl records had left the mainstream.

Bob Williams, who co-owns The Foolery, 25 W. Main St., Carmel with his wife Julie, is one of those who are taking advantage of the comeback of phonograph records.

“The sound quality off of vinyl is better than what you have off digital,” Williams said. “A lot of the younger kids have heard nothing but digital so when they hear the music off vinyl for the first time, it’s like an epiphany of how good it is.”

Williams, 45, said many younger bands, such as the Black Keys and Jack White, are producing their music on vinyl.

“They realize the sound quality is better and they want their fans to hear it in the best possible light, too,” Williams said. “There is an inexpensive record player from Crosley, which costs $75 to $100 and they’re selling them everywhere. More and more people are getting these turntables because they are inexpensive. People that used to have records and got rid of them are coming back into it again and they love it. It’s the convergence of the older crowd and younger crowd coming together that you don’t see often.”

Williams said there also are some higher end record players, which run from $500 to $1,000.

The Foolery strictly sells vintage vinyl. Williams said customers buy the records not only as collectors’ items but to play them. Williams has large collections of musicians’ albums such as Beatles, Eagles, Rolling Stones, Jimi Hendrix and Pink Floyd.

The record’s condition determines how much Williams can sell the same album.

“At first I thought (vinyl’s comeback) is something that is going to come and go but because there is some substance on why people are going to it, it’s not going to go away any time soon,” Williams said. “As a collectible, it’s gaining steam as well.”

Williams said the vinyl records were the last item they added to the mix when he and wife opened the collectibles store in April 2014.

“We had no clue how it was going to work and it’s just blown up,” Williams said. “Now it’s half our business. It’s a challenge to get the older stuff. That’s the hardest thing for us in the vinyl, keeping it fresh by getting new collections.”