You are at:Home»Current in Carmel»Carmel Community»Carmel woman named CICOA 2015 Caregiver of the Year 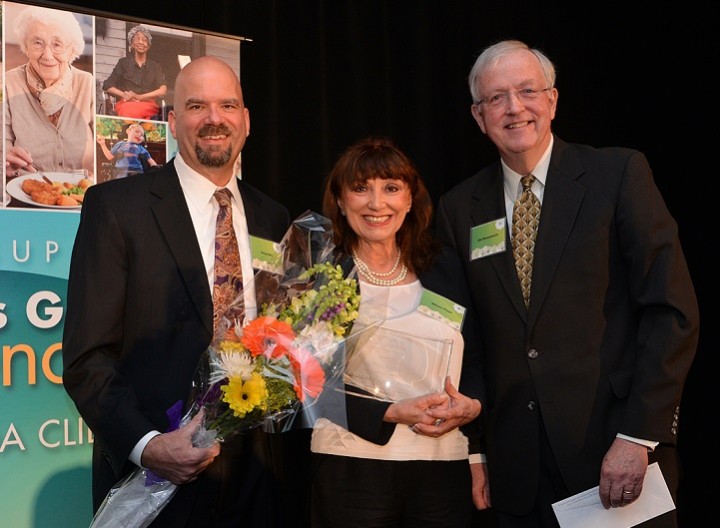 Milana Riggs, Carmel,  was  named the 2015 Caregiver of the Year this morning at the sixth annual CICOA Aging & In-Home Solutions’ Signature Breakfast, among 600 attendees at the Ritz Charles in Carmel. The Caregiver of the Year Award honors one personal caregiver in Central Indiana who models courage, sacrifice, strength and creativity while caring for another. CICOA, which serves older adults, people of any age with a disability and family caregivers, also raised a record $122,195 at the event.

Riggs first begin caring for Georgia and the late Paul Bradley 10 years ago after promising their ailing daughter, Charlene, that she would look after them when Charlene was gone.

A restaurateur and a chef before retiring from the airline industry, Milana became like a daughter and a friend to the couple. In his nomination, David Spilker, the Bradleys’ nephew, says Milana graciously sacrificed her own time to make Georgia and Paul’s senior years brighter.

“I engaged them in life,” said Riggs. “We tried new things that they’d thought about, but didn’t do.”

They stopped for sodas at the chocolate shop on Monument Circle, visited the L.S. Ayres Tea Room and talked about the past and film stars and music from their era. Mr. Bradley passed away in 2011 at the age of 101, just days after celebrating their 80th wedding anniversary.

After his death, Georgia moved into Milana’s home. Today, at 103, breast cancer and dementia have slowed her down, but she still made it to her old stomping grounds, the White River Yacht Club, on St. Patrick’s Day.

“We laugh every day and have fun,” said Riggs.

Riggs credits her Serbian heritage for her steadfast commitment to the Bradleys. “We are a strong people. We believe in valor, integrity and loyalty to the death. When you give a promise, you do it no matter what the cost.”

A Pew Research study shows the number of adults in the U.S. who are caregivers jumped from 30% in 2010 to 39% in 2012. Last year, CICOA provided respite for 1,035 caregivers and presented 92workshops to support caregivers in this role.

“Milana is a shining example of how we should look after each other as we age, regardless of family ties,” said Orion H. Bell IV, CICOA President and CEO. “We appreciate the gift she’s given the Bradley family and the generosity of our donors who make our programs, call center and other family resources available to the community.”