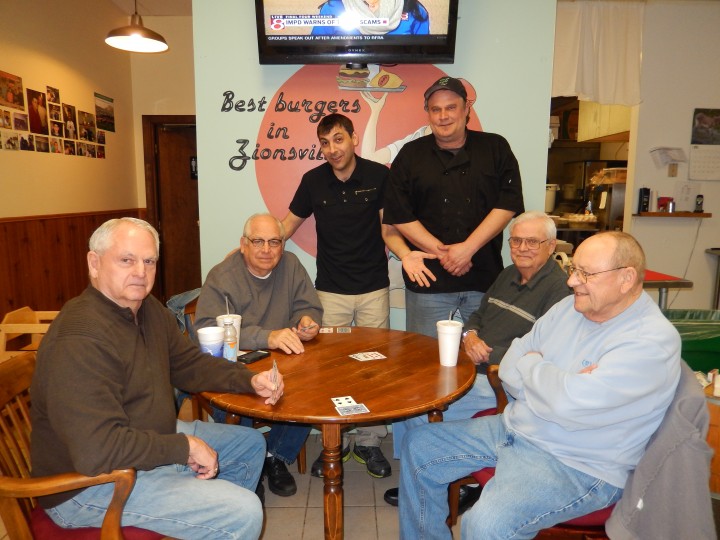 Remember the “Euchre Guys?” Sure you do. I wrote a column about them recently, and they claim it’s made them famous – in Zionsville anyway.

A quartet of retired locals, they’ve shown up at dawn every Friday to play euchre at Big Dave’s Deli for the past 12 years. Fears were, that with the lease up at Big Dave’s in January, they would become four euchre players in search of a place to deal.

“Paperwork is still in the works,” says Martin, “but I’m going to be the owner.”

He and his wife, Brooke, are excited about the new adventure.

“It’s a long way from Macedonia to Zionsvllle,” says Martin. And he should know. The Macedonian made his way to the Village by way of Germany. That’s where he met his wife, who was Brooke Ferrin at the time. A 1993 ZCHS graduate, she was working as a hair stylist in that country. She spent a total of 12 years there but returned to Zionsville with Martin and their son, Carter, in 2006.

“For me,” says Brooke, “it was coming back home. Zionsville is a great place to raise kids.” (Carter is now 13 and a student at Zionsville Middle School West.)

Martin is a U.S. citizen, and the family makes its home on Ash Street. Brooke calls their new venture “an American dream come true – to own a little deli.”

No big changes are expected at the deli except for making it more “female friendly,” according to chef Mike Weber. That includes “more lettuce,” he laughs.

Martin adds they will also offer “more fruits and vegetables. The girls come in and want things like spinach feta omelets. ”

Dinner will be served from 5 to 8 p.m. Tuesday through Friday, either eat-in or take-home. A special will be offered each of those nights, but Martin says you don’t have to order the special – or even dinner – in the evening.

“You want breakfast for dinner? Fine,” he says.

As for the “Euchre Guys,” they are always welcome. “I see them like my grandparents,” says Martin.

Mike nods. “The Fix twins grew up with my parents,” he says. “They are like family.”

So there you have it. New owner, same deli. Food up front. Euchre in the back.

Every Friday for 12 years and counting.

Donna Monday is a Zionsville resident and columnist. She can be reached at dmonday8689@att.net.