You are at:Home»Current in Zionsville»Column: Ancestor of the Taj Mahal 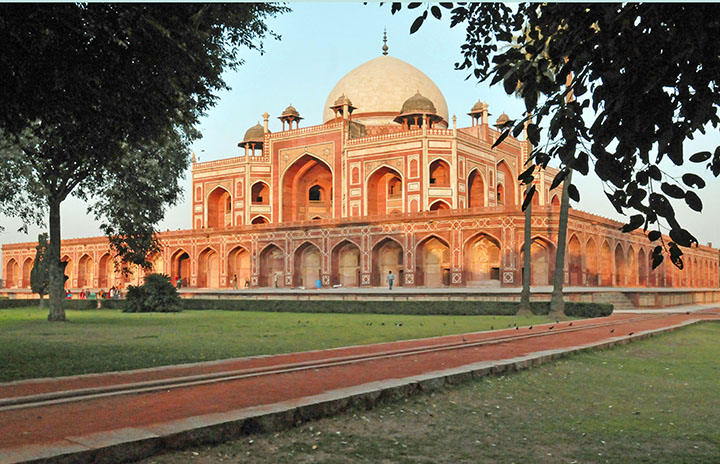 The tomb of Emperor Humayun near Delhi, India, is a spectacular example of sixteenth century Persian architecture.  It inspired what many consider to be the most beautiful building in the world.

Humayun became the second Mughal Emperor in 1531 A.D. upon the death of his father, Babur, a descendant of both Timur and Genghis Khan who founded the Empire in 1526 after capturing northern India.  Pashtun rebels drove Humayun from his throne in 1540 and he obtained sanctuary in Persia.  When he regained control of the Mughal Empire in 1555, he brought back to India Persian tastes and a Persian wife named Haji Begum.  Six months after his triumphant return, Humayun died after falling down the steps of his library.

Haji Begum was devastated by her husband’s sudden death and sought solace by undertaking the Hajj pilgrimage to Mecca.  She returned motivated to erect a magnificent building to serve as Humayun’s mausoleum, personally funding its 1.5 million rupee cost and supervising its five-year construction.  Completed in about 1572, the tomb was constructed primarily of red sandstone, accented with white and black marble.  Designed by Persian architect Mirak Mirza Ghiyas, the symmetrical two-story octagonal structure incorporated Persian architectural details, including a large double dome and arched alcoves.  The innovative design also featured classic Indian kiosks called “chhatris” positioned around the dome.

Humayun’s tomb was surrounded by a 30-acre square garden called a “charbagh” (four gardens), divided into four identical sections by intersecting water channels symbolizing the Islamic image of the rivers of paradise.  When the English gained control of India, they had a different idea of paradise and replaced the charbagh with a proper English garden, complete with roundabouts.  The garden was restored to its original design after Humayun’s tomb became a UNESCO World Heritage site in 1993.