You are at:Home»Current in Carmel»Barrington of Carmel residents move to the beat of Zumba Gold 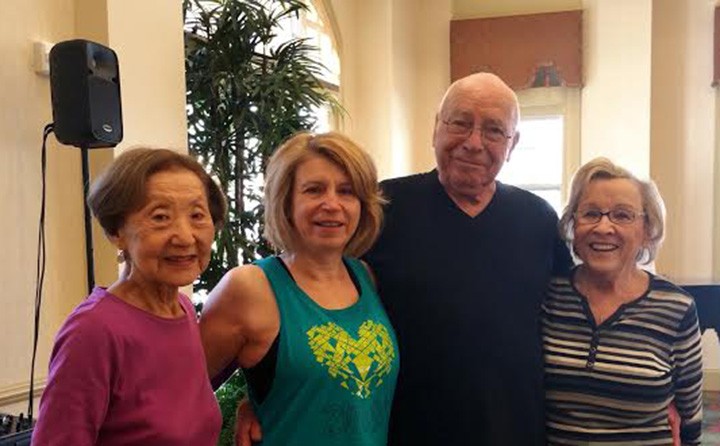 Nancy Zellers is a local police officer in Carmel with a heart of gold and the certification to teach Zumba Gold. Her passion for moving to the beat led her to begin teaching a class at a local retirement community, The Barrington of Carmel.

Zellers attended a job fair at The Barrington and presented the interviewer with the idea of teaching a Zumba Gold class to residents. The Barrington brought Zellers on board, and the class has been a popular hit with residents ever since. The class attracts 18-20 residents every Saturday at 10:30 a.m.

Zumba Gold is a modified version of the popular fitness craze that involves dancing to upbeat music. The Gold version is modified for lower intensity with less jumping for a reduced impact on the knees and simplified, easy-to-follow choreography.

The program is focused on balance, range of motion and coordination with cardiovascular elements and muscular conditioning. Many residents have described improved cardiovascular capacity and increased self-confidence as a result of the program.

Residents at The Barrington are enthusiastic about participating in the class, and about spending time with Zellers. One resident named Claire Campbell explained that Zellers goes above and beyond to show care and respect for the residents. Zellers reportedly produces a newsletter for the class, brings flowers on occasion, and even takes prayer requests. “She’s a darling girl. She cares so much.” says Campbell.

Campbell described Zellers as being “everything you would want in an instructor.” Zellers constantly gives praise and encouragement to the residents. When someone is out of step, Campbell says her response is, “It’s not a mistake, it’s a solo.”

Zellers says she plans to begin teaching more Zumba Gold classes in the future. She has already been approached by fellow police officers about starting a class for city employees.