You are at:Home»Current in Carmel»Carmel Community»Violinist winners to perform in Carmel April 12

The International Violin Competition of Indianapolis has always been a unique feature of our city’s capital. As the biggest violin event in the world, “The Indianapolis,” as it is referred to, determines the best up and coming violinists on earth. This year, the top three winners are being brought to Carmel to show just how deserving they are of their gold, silver and bronze awards. Jinjoo Cho, gold winner, Tessa Lark, silver winner, and Ji Young Lim, bronze winner will all perform. 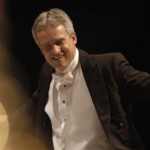 Coming April 12, the Gold-Silver-Bronze event features the top three laureates of The Indianapolis performing with the Carmel Symphony Orchestra. The event will take place at The Palladium, a venue in which conductor David Bowden deems perfect for the event.

“The Palladium is one of the top places in the entire country for orchestral music,” Bowden said. “It is a fabulous acoustic environment. Inside is extraordinary. It’s gorgeous. The acoustics are wonderful. It’s just amazing.”

This year the top three winners will be performing together, something that Bowden believes has not been done before.

“It’s a privilege to be able to present all three (winners),” he said. “This is the first time that all three will be on the same stage, at least to my knowledge, since they won the competition (The Indianapolis). And they don’t do a whole lot together. They have individual performances that are contracted, and so this means that [guests]get to see all three in one sitting.”

The performances will include works from composers such as Maurice Ravel, Dmitry Kabalevsky, Henryk Wieniawski and Alexander Glazunov. One piece was so exclusive that it actually had to be sent over from Russia.

“The second piece that is done by a soloist is one that is very seldom played. It is a huge fun piece. We actually had to import this from Russia,” Bowden explained. “Nobody had it anywhere else in the United States. We had to import this in order to do it. The American soloist, Tessa Lark, is the person who is playing this particular piece and she was very interested in doing something unusual, very willing to do it. So she is learning this form scratch.”

Bowden promises that the concert will be one to remember, leaving the audience standing and shouting upon its finish.

“This is one of those concerts where we’ve got lots and lots of really powerful stuff,” he said. “This will be a concert that will be a great memory. People are going to remember the individuals because they are virtuosos of the first rank, these competition winners. People will come and go, ‘Oh my goodness this is unbelievably virtuosic.’”