You are at:Home»Current in Westfield»Westfield City council recap

What happened: Westfield has implemented an ordinance that will regulate pawnshops more closely.

What it means: Similar to ordinances in Fishers and Marion County, Westfield has created effort to prevent the sale of stolen property. The ordinance is meant to deter local criminals and those coming north from Indianapolis and surrounding towns and cities with pawnshop ordinances. The ordinance involves pawnshop and any secondhand shop including antique stores, thrift shops, metal recyclers and secondhand metal dealers. “It’s a great opportunity for stolen items to be replaced,” councilor Bob Smith said.

What’s next: Store owners will be required to register with the Westfield Police Dept., pay a $50 registration fee and keep a record of transactions. Stores also will now keep an electronic inventory tracking system and then transmit digitally to a database, which viewable to the police department. Information includes the date and time of each transaction, a detailed description of each item, amount of money exchanged, detailed information and a digital photo of the seller, and a digital photo of any item over $25 that does not have a serial or ID number. Violations would result in a $500 fine.

What happened: A text amendment to modify the number of dwelling units, landscaping and amenities standards applicable the Andover North development.

What it means: The ordinance allows for a maximum of 240 total lots consisting of four product types each of which have separate unit number requirements. Market demand has caused the developer to remove one home type and increase the number of other types. In amenities, the development asked to remove its clubhouse and wants to add a dog park instead of a secondary playground.

What’s next: The ordinance was approved after a unanimous favorable recommendation from the advisory plan commission. 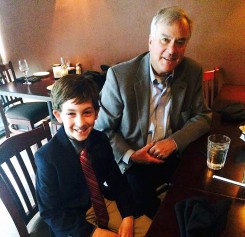 Mayor for the evening – Owen Crosslin, a fourth-grade student at Carey Ridge Elementary, has dinner with Mayor Andy Cook prior to the March 23 city council meeting. Crosslin was mayor for the evening after he attended and won the opportunity at his school’s winter carnival and silent auction.