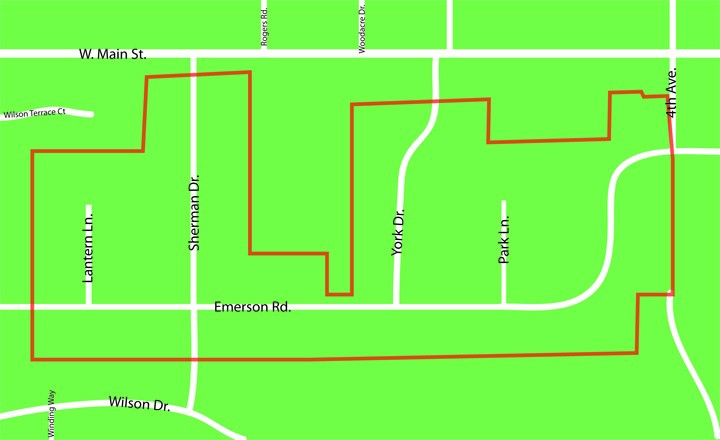 This map shows where the over- lay designation would sit in the Johnson Addition neighborhood.

Neighborhood organizers have stated the benefits of preserving the Johnson Addition area by adding a zoning classification called an overlay. They claim these new city guidelines will help protect the classic 1950s feel of the neighborhood without creating draconian rules.

But opponents who live in that neighborhood recently voiced their disagreement at a public hearing of the Carmel Plan Commission.

City Planning Administrator Adrienne Keeling explained that the new rules are a blend of current historic overlay guidelines and the recent attempt by neighbors to turn the area into a conservation district. Basically, the overlay would require that any new houses built – and some major remodels – conform to the look and feel of the neighborhood, which means rectangular ranch floor plans with open front porches, attached garages and minimum front yard space.

The new guideline that most opponents brought up is that building heights cannot exceed the tallest dimension of the two nearest principal buildings on the same side of the street by seven feet. They say that essentially eliminates the option of adding a second story to a house because seven feet wouldn’t be enough space to do that.

“Two story houses aren’t evil,” Patrick Meharry said at the meeting. “I’m not advocating for some of the monsters we’ve seen, but there are plenty of 50’s-style houses with two stories.”

Jana Souers said she moved into the neighborhood with plans on starting a family, but she thinks more space might be needed to do so. She said she would like the option to add-on to her home and she feels this overlay could force some people to move due to lack of options.

Souers noted that in a recent Current in Carmel article, those who advocated for the overlay zone compared the Johnson Addition to something out of the show “Leave it to Beaver.”

“Wouldn’t you know it, the Cleavers lived in a two-story home,” she said.

Keeling reiterated that this is still an early stage in the process and that the city is willing to listen to public input to help them adjust the zoning guidelines.

“We do not intend to restrict two story homes,” she said. “We will try to make that more clear.”

This zoning action has been taken by the city with input from neighbors and if approved by the plan commission would go through another public hearing with the Carmel City Council.

City councilor Kevin “Woody” Rider, a member of the plan commission, said he heard from most opponents that they were at least open to the idea of the overlay zone if some changes are made, so he thinks it’s great that everyone is willing to work within this process.

Larry Goens told the plan commission he hopes the changes go through because he’s worried about large-scale development casting a shadow over his quaint neighborhood.

“I’m fearful of the change,” he said. “I would not like to see the changes come to our neighborhood. I usually don’t like this much government control but in this case I’ll make an exception.”