You are at:Home»Current in Westfield»Westfield investors look to redevelopment industrial area into mixed-use commercial with hotel and restaurant 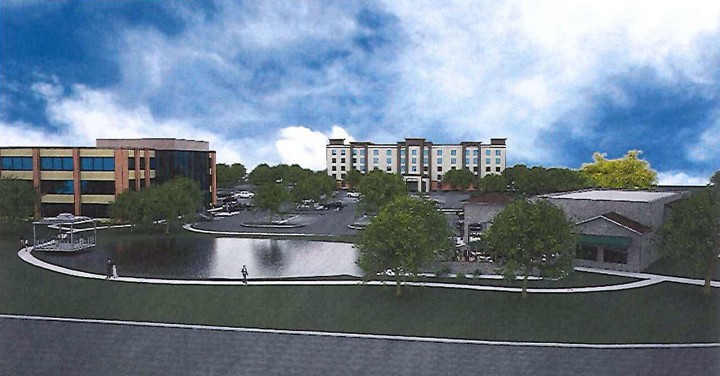 A rendering of the projects shows the water feature and from left, mixed-use professional building, hotel and restaurant. (Submitted rendering)

A group of local investors are looking to transform 7 .1 acres of industrial area into a mixed use commercial development near U.S. 31. Officials said the project is expected to produce $35 to $45 million of assessed value to Westfield on top of multiple job opportunities.

On March 9, the Gateway Southwest district was presented to the Westfield City Council. Randy Zentz of Westfield Community Land Investors said the property consists of five parcels that include a grain elevator and farm store.

“It’s not the highest or best use for the area,” he said. “We plan a water feature at the front of the property, which is already below grade and can work as a retention area. Our focus also works on the whole property being a pedestrian friendly area with trails that will eventually connect with the Monon and in turn connect to Grand Park.”

The 7.1 acres will include four buildings.

“Access from (Ind.) 32 has been removed. We need destination products to attract visitors,” Zentz said.

Zentz said the 10,000 square foot, three-story mixed-use office building will contain a variety of users including medical offices and professional services. The other two buildings include an 8,000 square-foot general business building and a 9,000 square-foot, single-story restaurant.

“We are working with several different users for this location,” Zentz said. “We are hoping for possibly breakfast, lunch and dinner but definitely lunch/dinner type of sit-down quality restaurant for that location.”

“We envisioned a large hotel/conference center use for that parcel,” she said. “This isn’t what we were looking for.”

The project now heads to the city’s advisory plan commission for review and a public hearing on April 6. It is expected to return to the city council on May 11.