You are at:Home»Current in Zionsville»State officials talk school funding 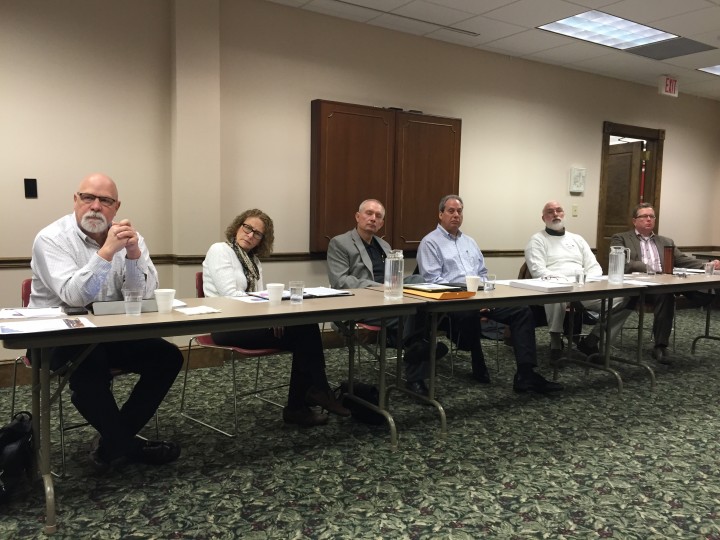 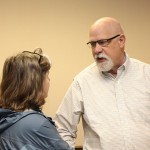 After the meeting, Rep. Tim Brown (R-Crawfordsville) speaks with a member of the audience.

What happened: A group of Indiana State Representatives and Senators spoke to the public on various topics including the school funding formula.

What was discussed: The main focus of the meeting was to update the public on the current progress of the states school funding formula and to interact with the public via a question and answer session. State Senators and Representatives first introduced themselves to the public and followed with various topics currently in discussion.

Speakers stressed that school funding is key and that nothing is more critical. More funding is planned to be put towards the school formula than in the past few years, adding that the 2013 fiscal year had more than 50 percent of its budget funding K-12 education. Funding will continue to increase through 2017. An estimated $6,669,709,521 is to be used towards K-12 tuition support in the 2015 fiscal year, which will increase in the 2016 and 2017 fiscal years.

“We spend $15 billion a year of state money, when you add federal money into that it’s about 28 to 29 billion a year,” said Rep. Tim Brown. “ By far and away the largest expenditure for money is K-12 education. Our budget in the second year, we’ll spend 6.9 billion in general operations of K-12 education.”

Increases in education funding over the biennium were approximately $469 million including a near 9 percent increase to the school funding formula’s foundation, benefitting every student. The proposed budgets would reduce the gap in per-student funding between the lowest and highest funded public schools, noting that different school districts have different, unique needs. In the per-student severe disabilities grant there will be an $8,000 increase and a $2,300 increase for the moderate disabilities grant.

A two-year state budget will be implemented this year that will be balanced, not exceeding the state’s ongoing revenue, prioritized in funding needs that best suit the public’s needs to support economic growth such as education and infrastructure.

Public members of the audience asked questions regarding local school funding action plans at how specifically the gaps in lower funded schools versus higher funded schools will be addressed and how the free/reduced lunch programs offered at schools are regulated.

Other questions pertained to plans for how Indiana’s current environmental state is being improved such as local and state water quality and the overpopulation of deer in Eagle Park, how common construction wages will be addressed, concerns about funds collected from incarcerated individuals and their families that are then used towards law enforcement resources and property tax distribution.