You are at:Home»Current in Carmel»Carmel Community»New Carmel Fire Chief has passion to serve 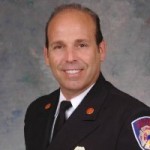 At age 25, David Haboush found himself in corporate sales and wasn’t unsatisfied.

So Haboush took a good look at his future.

“I asked myself if this is where I wanted to be when I was 40,” Haboush said. “Quite frankly, I wanted to help people and be in a position where I could make a difference in people’s lives. I didn’t feel I had a passion for the corporate world. This was the perfect opportunity to make a difference.”

Haboush, 49, has been with the Carmel Fire Department for 24 years. On March 2, the Carmel resident was named Fire Chief, after Matt Hoffman resigned for personal reasons.

“This is a good mix between government and being able to impact the community,” said Haboush, who was in student government at Indianapolis Howe High School.

Haboush has worked out of all the station houses. Haboush worked in administration, serving as Assistant Chief of Administration and Finance from June 2007 to March 2014 and then for the past year has been station captain at Station 42.

“It’s a unique situation because I’ve seen both sides,” Haboush said. “I’ve been in administration and for the last year I’ve been a shift officer. Looking back I was thankful to have that year to go back on shift.”

Haboush was offered the job soon after Hoffman resigned.

“The mayor and his staff knew my credentials and knew me from working with me for a number of years,” Haboush said. “So it was very quick process.”

Haboush said becoming chief began to be a goal when he became an administrator in 2007.

“Since then I’ve worked to get some credentials to become chief,” said Haboush, who became accredited by the Center for Public Safety Excellence as a Chief Fire Officer.

“Steven Couts was a wonderful human being,” Haboush said of the late Couts. “I have great admiration for him and still do. This building is named after him. By watching the way he lead, it peaked my interest. I saw a lot of great traits and he helped. Doug Callahan was the same way. Both had huge impacts on me. Keith Smith was then here as chief for six years. All three of them were mentors.

“That was part of my interest in doing this. I’ve always felt a sense of being involved and being able to make a difference. Being in a leadership role I’ve been able to have a voice in shape and direction of the department through the years. Fortunately, all the past administrations have been open to feedback to make it a better department.”

Pulled Quote: “This was the perfect opportunity to make a difference,” said Carmel Fire Department Chief David Haboush of his decision to work in fire and rescue.

Favorite way to relax: “We like to vacation in Lido Beach in Florida. I like to go on walks with our golden retriever and bicycle in Monon Trail.”

Favorite TV show: “I watch ‘The Bachelor’ with my wife so I’ll save a little face on that one.”