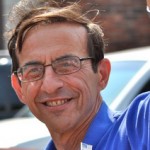 John Accetturo, who is campaigning to regain his former seat on the Carmel City Council from incumbent Sue Finkam, had to receive unexpected surgery this weekend to have his appendix removed.

During the day on March 14, Accetturo was out knocking on doors with his wife Christine to try to spread the word about his campaign.

After walking for more than three hours, he said he felt fine and he even spent the rest of the sunny day washing his car. Nothing appeared to be wrong, but after he had dinner with his family, he said he felt a sharp pain and had to go to the doctor at Carmel St.Vincent Hospital. He said he had to have his appendix removed on Sunday, but that he’s feeling much better, but still in a little pain.

Accetturo said he plans to be back out campaigning after a few days’ rest.