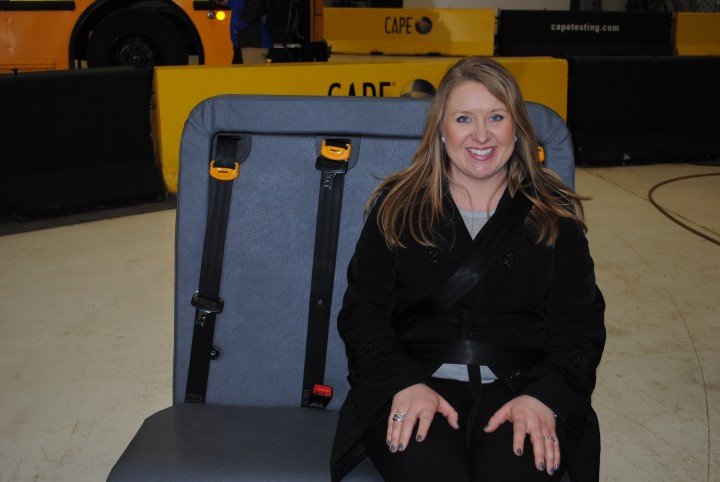 Westfield Washington Schools school board secretary Amber Willis is an enthusiastic supporter of the pilot program to add seat belts on six of the district’s school buses.

“Increasing safety is always the No. 1 (objective),” said Willis, who has two children at Maple Glen Elementary. “Being a school board member and being a mom I think adding safety to a bus is nothing but good, especially for the six buses that travel to away games, to field trips and that’s the pilot program.”

“Assuming the pilot program goes well exceeds our expectations we would hope to have seat belts in all the buses for the all the children.”

Tom Anthony is president of Westfield-based IMMI, which is the leading provider of seat belts for school buses.

“We didn’t want to be heavy-handed just because we’re next door (to Westfield Schools),” Anthony said at media conference on March 6 at the Center for Advances Product Evaluation on IMMI’s campus. “But the time is right with all the things happening with Grand Park and with U.S. 31 coming through. I applaud the mayor (Andy Cook) and the school superintendent (Dr. Mark Keen) for their progressive thinking. We have sports teams, choral groups, field trips. That is a different kind of ride than maybe going mailbox to mailbox in neighborhoods. It’s the perfect way for them to tiptoe into the next generation of safety.”

Westfield is the first school district in Hamilton County to put seat belts on their buses.

“It makes perfect sense to have a company with the success and safety track record they have for us to partner with them and try to implement in our school bus fleet,” Westfield Washington school board president Duane Lutz said. “I can’t be more thankful for them to allow us the financial considerations to get this started and helping us begin somewhere.”

“We have 700,000 ride in school buses each day ride with safeguard school bus season with three-point lap controller belts,” Anthony said. “But there are 24 million kids that take the bus each day so our work has just begun.”

The seat belts can be adjusted for two or three persons in the seat depending on the size of the students.

Cook stated he was proud to partner with IMMI “to help keep our kids safe.”

More than 600 school buses have been involved in rollover accidents in the past five years and annually 17,000 students are injured in school bus accidents.

“We can see how that (pilot program) works and move forward with the rest of the fleet in due time,” Lutz said.