You are at:Home»Current in Zionsville»Groove Essential to highlight inaugural Eagle Madness 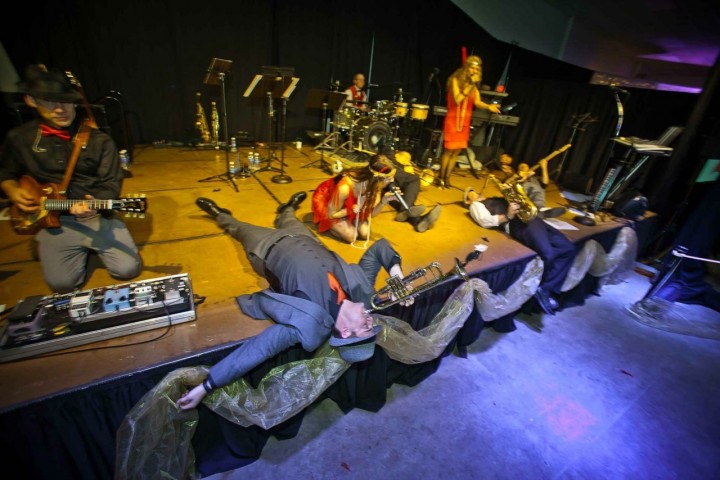 Zionsville Middle School band director Josh Weirich is known locally for his skills in the classroom, but he is eager to display the performing facet of his talents.

Weirich and fellow ZMS band director Chris Murray will have that opportunity as their band, Groove Essential, will play at Eagle Madness, a Zionsville Athletic Booster Club fundraiser on March 21.

“It’s exciting for Chris and I to show some of the people in Zionsville a side of us other than our teacher side,” said Weirich, who plays the saxophone.

The fundraiser is set from 6:30 to 11 p.m. in the Whitestown Municipal Complex, at the corner of Whitestown Parkway and S. 700 E.

Weirich, a 37-year-old Zionsville resident, is in his 14th year of teaching band at ZMS. Murray, a trumpeter, is in his fifth year at ZMS.

“It’s a party band so we play a mix of rock, disco, Motown,” Weirich said. “We play all over the Midwest. One weekend we might be in Indianapolis and then next in Chicago and then in Cincinnati. We tend to stay three or four hours from Indianapolis. It’s a lot of fun and we’ve played some really neat places. We’ve played for governors and we’ve played several times at Churchill Downs for the Kentucky Derby.”

Weirich has performed with the Temptations, The O’Jays, the Four Freshman and Lawrence Welk Orchestra, among others.

This is the first spring fundraiser for the Booster Club, whose major fundraiser, EagleFest, is traditionally held before the first home football game

Ginger Holt, Eagle Madness chairwoman for the Booster Club, said the Zionsville athletic department wanted to hold a spring event to keep the club’s momentum going throughout the year. Holt said the plan is to have Eagle Madness join EagleFest as an annual event.

While EagleFest is for families, Eagle Madness will be for those 21 and older. The event is casual attire and will include stadium-style food, beverages, a silent auction and TVs so fans can watch any games going on that evening.

Ticket prices are $40 and can be purchased at www.zionsvilleeagles.org.