You are at:Home»Current in Zionsville»Column: Scroll: Treasure map or ancient hoax? 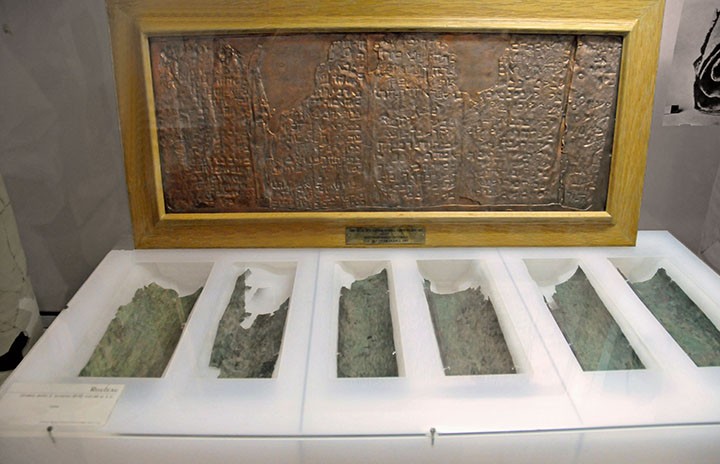 The so-called “Copper Scroll,” now housed in a Jordanian museum, identifies hidden caches of almost unimaginable quantities of gold and silver.  Although some scholars believe the scroll is a 2000-year-old hoax, would-be Indiana Joneses keep digging.

After local Bedouins found the original Dead Sea Scrolls in caves near Jericho in 1946, archaeologists searched 250 nearby caves.  In 1952, they found two scrolls in what became known as “Cave 3,” made of high-grade copper instead of the parchment and papyrus of scrolls found earlier.  Because the metal had long since corroded and become brittle, the scrolls could not be unrolled.  A laboratory in Manchester, England, eventually opened the scrolls by cutting them lengthwise and then separating the sheets.  The translated Hebrew text, written in script unlike that of the other scrolls, showed the two scrolls were part of a single scroll that had separated before being rolled.  What became known as the “Copper Scroll” lists 64 locations where specified quantities of gold, silver and other treasures can be found.  Some experts have estimated the total amount of gold and silver to be more than five million ounces, worth billions of dollars at current prices.

Scholars are divided about who made the Copper Scroll and what, if any, treasures it describes.  Some believe the scroll identifies items from the Second Temple in Jerusalem, hidden before the Temple was destroyed by the Romans in 70 A.D.  Others argue the items were accumulated by first century Essenes living in Qumran, near where the scroll was found.  Still others claim the treasures came from the First Temple, destroyed by the Babylonians in 586 B.C.  Finally, some scholars believe the Copper Scroll repeated an ancient fable.  Fable or not, explorers from around the world have sought fame and fortune using the ambiguous descriptions in the Copper Scroll, so far digging up only dirt.

Because Jordan financed the expedition that found the Copper Scroll, for years it was displayed in the Jordanian Archaeological Museum.  The scroll recently moved to a much larger display in the newly opened Jordan Museum in Amman, where it is among the museum’s most popular items.