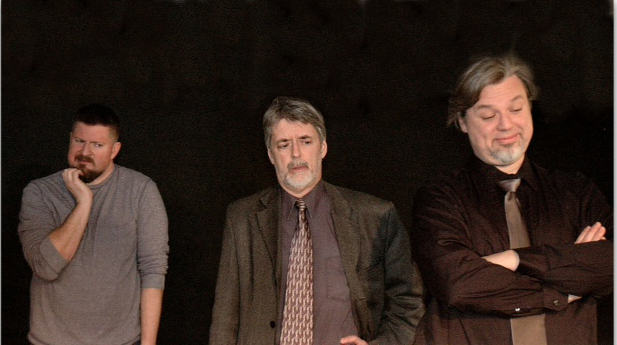 As he prepares his swan song to the stage-directing part of his theater career, Ken Klingenmeier relishes the opportunity to present Yasmina Reza’s play “Art” for a second time — for a different company but on the same stage as in 2008.

This time he will emphasize the Tony Award-winning show’s serious side, though its comic aspects are never far from the surface. As the French playwright said about her work in 2000, “Art” is a tragedy “because it is a break-up of a friendship, a rupture between people… My plays have always been described as comedy, but I think they’re tragedy. They are funny tragedy, but they are tragedy. Maybe it’s a new genre.”

“It’s a play about friendship, not art,” Klingenmeier explained. “And the way she details it, it’s effective storytelling.”

Both funny and sad, “Art” is a fine candidate for “talkbacks” after every performance, the director has found. He has arranged for those with the new production because they worked so well in 2008, he says. The conversations naturally settle on what makes someone your friend. There’s less focus on what makes something art, because Reza is mainly concerned to explore the nature of friendship, using art as a vehicle.

Klingenmeier has two-thirds of the cast he worked with in 2008: Daniel Shock returns as Serge, a man who pays a lot for a white-on-white painting he’s quite fond of, and Larry Adams as Marc, his friend, who is deeply skeptical of the purchase, putting a strain on the friendship. The newcomer is Clay Mabbitt as Yvan, a fun-to-be-with, eager-to-please friend of Serge’s who is drawn into the conflict.

Carmel Theatre Company is in its second season at the 70-seat Studio 15 in Carmel’s Arts and Design District.  In that location, the troupe succeeds Carmel Repertory Theatre, which has disbanded.

A retired postal worker long active in community theater, Klingenmeier has a stage background stemming from his college years in California. He is no stranger to professional theater, but when he wanted to focus on his family years ago, he took 13 years off from the stage. Normally, one directing assignment and one acting gig annually worked best for him when he held a job as a letter carrier in Noblesville.

His first stage appearance after moving to the Indianapolis area came with “Shadowlands” at the Edyvean Repertory Theatre (now defunct) about 20 years ago. His local directing involvement began in 1997, directing “Butterflies Are Free” in Westfield.

When he turned 65 a year ago, “ I decided to stop striving,” he said. He wanted to step aside from having the same kind of intensity he was used to summoning as an actor, so discontinued working with an agent. Along the way, he prepared to stop directing as well.

“I’m rounding off this part of my life,” he said in an interview. “Directing is a heavy load,” often increased in community theater by several other responsibilities a production’s  director needs to take on. Klingenmeier has designed and built sets, for example, and for “Art” designed the poster and is handling publicity.

He is remaining active in performing arts by shifting his skills to directing, producing and writing videos for the Indiana University Dental School. The continuing series focuses on ethical dilemmas in dentistry, and his schedule includes seven more before the series is complete.

This has given Klingenmeier stimulating work he can sink his teeth into, so to speak. But the siren call of live theater may still attract him, he concedes.

“I will be acting more in the future if I read a play that grabs me,” he promised. In the meantime, he is putting his heart into “Art.”

What: Carmel Theatre Company production of “Art,” by Yasmina Reza.