You are at:Home»Current in Carmel»Carmel Community»Ex-WNBA player finds way to share skills with Carmel Parks and Recreation 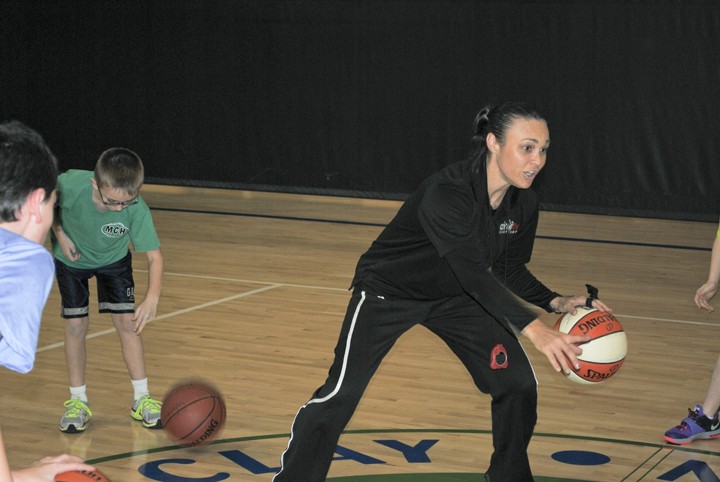 Tully Bevilaqua had a long run in the WNBA and other professional women’s basketball leagues.

Now it’s time for her to share what she learned with youngsters.

“I enjoy it,” she said. “I’ve had my day of playing and I’ve had a lot of people help me. So I’m kind of going into that role of giving back now. Being a coach myself and helping other kids that were in my situation.

Bevilaqua, 42, has become a fixture at the Monon Community Center, running twice-weekly clinics nearly year-round for about three-and-a-half years.

“It such a great relationship with the Monon and such a great facility, it’s hard not to accept the offer to come back on a regular basis,” Bevilaqua said.

Bevilaqua, who played with the Indiana Fever among other WNBA teams, primarily works with boys and girls ages 7-14 for one-hour workshops on Tuesdays and Thursdays. Continuity is important, she said.

“It does matter what level you are,” Bevilaqua said. “Everyone gets the work they need to get better. At the end of the day, it has to be fun for them to want to come back more as well as improving their individual and team skills.”

Bevilaqua said it is enjoyable to see her students succeed.

“Having children myself when they do a little milestone, you forgot about what you’ve achieved in your life because now you are focused on these little ones,” Bevilaqua said. “It’s the same here when someone is trying to learn the footsteps for a layup and then they finally get it and you see that ‘I did it look’ in their face, it’s very rewarding.”

“You never know maybe they’ll one day pick up a basketball,” Bevilaqua said.

In addition to playing professionally in  Australia and other countries, the 5-foot-7 guard spent 14 seasons in the WNBA, retiring after the 2012 season with San Antonio. Bevilaqua played six seasons with the Fever (2005-10). She won a 2008 Olympic silver medal with the Australian women’s basketball team.

Bevilaqua and her life partner Lindsay own Gym 41 (her uniform number in the WNBA), 5135 W. 86th St., on the west side of Indianapolis where she runs boot camps and has physical training for adult and children.