You are at:Home»Current in Westfield»Family tradition 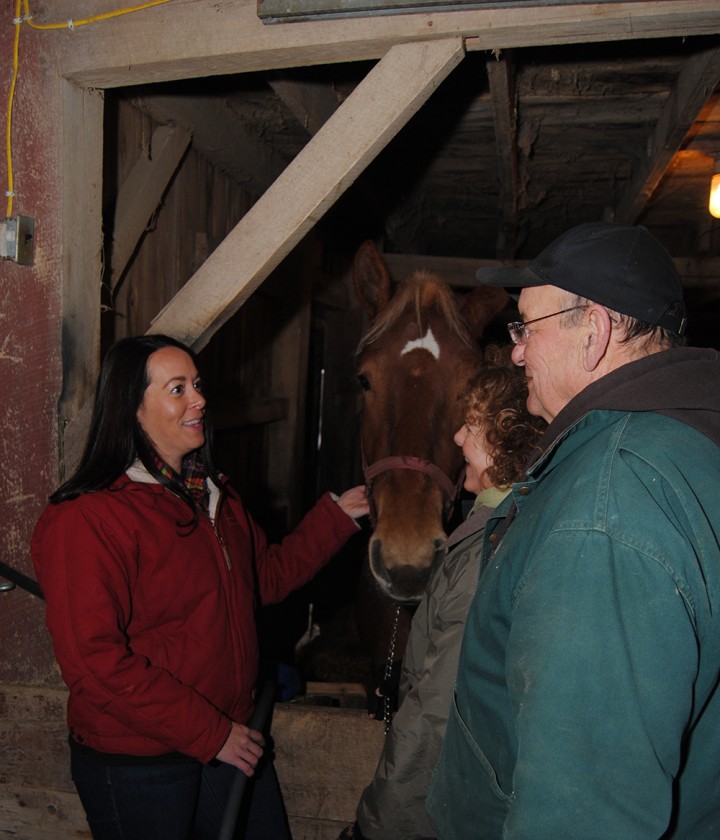 Washington Township Trustee Danielle Carey Tolan talks with her parents, Jim and Lynn Carey, on their family-farm, which has Belgium draft horses. (Photo by Robert Herrington)

Public service, farming and a love of Westfield are qualities passed down generation to generation in the Carey family. Walter Carey first moved his family to the area two years before Westfield was founded and has a namesake for their original land – Carey Road. Now living on Six Points Road, various members of the Carey family continue the traditions started back in 1832.

“We are fifth generation farmers in Westfield and still farm to this day,” Danielle Carey Tolan said.

Carey Tolan is the most recent to continue the trend of public servants, which started with her great, great-grandfather as the first town assessor in Westfield and continued with at least one member of the family each generation.

“I’m proud she wanted to keep the legacy going,” said Danielle’s father Jim Carey, who served 28 years on the township board and 22 years on the plan commission.

Carey Tolan earned 11 varsity letters in volleyball, basketball, track and field and managing the wrestling team. She also is a member of the WHS Hall of Fame. 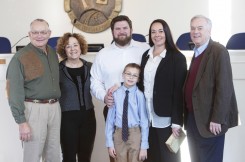 “It shows her aggressive personality,” said Lynn Carey, Danielle’s mother. “Whenever we’d give her a project or task to do she would do it and beyond. It’s the way her personality is. She always goes 110 percent and she always will.”

In November, Carey Tolan ran unopposed for the Washington Township Trustee seat, which was held by David Gill for 16 years.

“It’s important for me to give back to the community because of where I came from,” she said. “I decided to run for township trustee over three and a half years ago. It was a long decision on how I could best serve my community and what’s out there for me to use my skills and passion. Plan commission was a step to be more involved. I wanted to find the next step.”

Carey Tolan said the township cannot vote on a city election, but all the city and township can vote on township elections.

“The township isn’t all annexed into the city,” she said. “I could not run for mayor or city council.”

As trustee, Carey Tolan said the office is focused on poor relief, cemeteries and its parks system.

“Only two other townships in Indiana have a parks system,” she said, adding programming is available for preschool, children and adults. “It gets very confusing for residents because we have three parks systems in Westfield.”

Carey Tolan said the most important goal is to help those in need of necessary living items – assistance with their mortgage, rent, utilities or even food.

“We help them in any way possible and direct them to other resources if we can’t,” she said. “People come to us from all walks of life because life happens … We don’t want people to get evicted or have their lights or heat turned off. We don’t want them out on the streets.”

While it isn’t many, the trustee’s office deals with two or three homeless people a year.

“We just try to get them back on their feet so they don’t have to come to us,” Carey Tolan said.

The township also is responsible for the mowing and maintenance of Sugar Groove and Ballard cemeteries.

Just weeks into her first four-year term, Carey Tolan said her goals are to create a township website and collaborating with the city, fire and schools.

“I want us to work together to use our resources to be more efficient all around and in government we don’t work together enough,” she said. “I will help the community better understand what’s going on in the township and city. That’s not really the trustee’s role but I want to be a voice for the township because they don’t have one.”

Something you might not know about her: She was born and raised in Westfield and Carey Road was named after her family.

1832 – Carey family established itself in the Westfield area.

1920s – After World War I Alva Carey (Danielle Carey Tolan’s great, great grandfather) was the first town assessor. He was paid $2 a day and hired a worker to farm his fields while he was away for $1 a day.

1986-2014 – Jim Carey served on the Washington Township Advisory Board.

2008 – Westfield was incorporated as a city.

2010-2014 – Carey Tolan served on the city’s plan commission as the Washington Township representative.