You are at:Home»Current in Carmel»New Mormon temple could draw crowds to Carmel 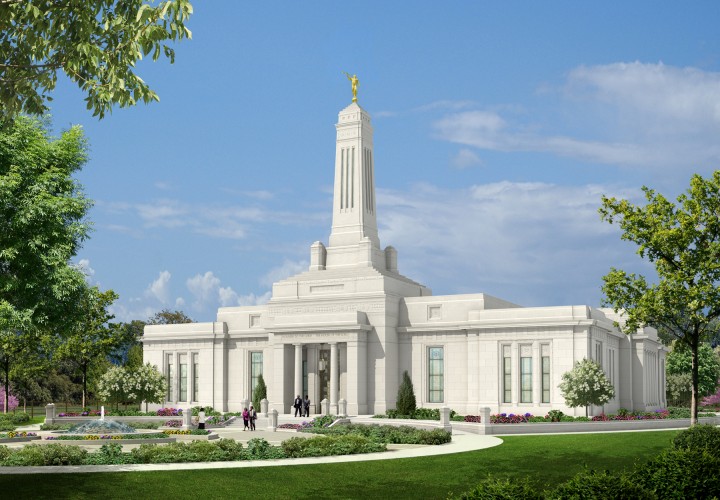 A rendering of the new Mormon temple. (Submitted image)

Back in 1974, the closest Mormon Temple to Indianapolis was in Washington D.C. That meant members of the Church of Jesus Christ of Latter-day Saints had to drive nine hours to attend sealed marriage ceremonies.

Even today, the closest temple is in Louisville, a two-hour drive.

But now Mormons in Central Indiana will have a temple in their background as construction should be complete on the new facility this summer in Carmel at 116th Street and Spring Mill Road.

But there are far more benefits than just “geographic convenience,” according to David Kinard, president of the Indianapolis Indiana North Stake. This new temple will benefit Carmel economically and help expose new people to their faith.

In the LDS religion, these temples aren’t used for Sunday worship. That’s still the function of church buildings, of which Central Indiana has many. A Mormon Temple is used for weddings, endowment ceremonies, and other religious ceremonies such as certain baptisms. There are 143 operating temples worldwide, according to the LDS website.

Kinard said one of the exciting effects of the new building will be an open house for people outside the faith, which will provide an opportunity for local Mormons to talk about their beliefs in an impressive setting. And the open house isn’t to just convert people, Kinard said.

“We hope this leads to greater understanding of who we are as members of the Church of Jesus Christ of Latter-day Saints and a stronger connection to the community,” he said.

Rick Hightower, a local LDS media relations volunteer, said there are three “stakes” in the Indianapolis area, which are groups of about 10 LDS congregations similar to a diocese in other faiths. There are about 2,000 to 5,000 members in each stake, he said.

“It’s a long awaited blessing for the people in this growing area to not have to drive hours and hours to go to a temple,” Hightower said.

Not only will this mean Carmel residents won’t have to drive far, but also it will bring visitors to the community and Hightower hopes, “everyone will stick around and go out to eat and enjoy our city.”

Kinard said he thinks the temple could even attract new people to move to Carmel.

“I think it is fair to say that at the very least many members of the Church of Jesus Christ of Latter-day Saints who are moving to the greater Indianapolis area will be inclined to live as close to the temple as they can,” he said.

Closest Mormon temple to Indianapolis throughout the years