You are at:Home»Current in Westfield»London calling

As most of her classmates watched the ball drop in Times Square, Westfield High School senior Jensen Bailey was thousands of miles away in London celebrating the New Year. From Dec. 26 through Jan. 2, Bailey joined 254 girls as part of the Universal Cheerleaders Association in England.

“I met so many amazing girls and I got to see and do things I never would have been able to do otherwise,” Bailey, 17, said.

Bailey said the holiday celebration was unlike anything she has experienced or seen.

“New Year’s Eve in London was very different,” she said. “There were like 700,000 people. There were fireworks everywhere. Everyone was so excited. There was an entire celebration during the day. Streets were blocked off everywhere. You couldn’t really do much because everything was closed. Everything was just very fun and festive. It seems like a holiday that is much bigger than any other holiday in London.”

The next day was just as big as Bailey marched in the New Year’s Day parade.

“It was amazing,” she said. “There weren’t a ton of groups in there. It was a two-mile parade that took three hours. It was very log but there were so many people watching, probably about 500,000 people. We stopped 20 times to perform a dance in front of people and the last time we stopped was on live television and they had confetti and lights.”

While London has numerous sporting teams, they lack cheerleaders.

“They thought it was really great we were there and wanted to take pictures with us,” Bailey said. “They were just really interested in our dancing.”

Besides parade rehearsals, the cheerleaders were able to explore the city and see many of the famous sites including Windsor Castle, Harrods Department Store, Buckingham Palace, Westminster Abbey and Tower Bridge.

“I learned about the history of the monarchy and the traditions of being born in London,” Bailey said. “It’s a huge city based around the monarchy and it’s very cool it is so different but it is also very modern.”

Bailey’s mother Tami said, “We are thrilled that she has had the opportunity to travel overseas and to experience a new culture. It was a memory-making trip!”

Bailey said the trip also showed her the importance of being a team and a leader because “you are paired with a bunch of girls you have never met before.”

“They sent each of us a DVD with material we had to learn and we rehearsed it for the first time all together in London,” she said. “It taught me a lot to be very cooperative and work with people you aren’t familiar with.”

Bailey said she got to know a lot of nice girls on the team and became really good friends with two teammates from Champaign, Ill.

“We’re actually planning to see each other in February,” she said.

Bailey said her performing background started at age 4 as a dancer at the Carmel Performing Arts Theater.

“When I was 7 I started gymnastics and tumbling and really fell in love with it,” she said. “I started doing All-Star cheerleading a couple years later and tried out for the middle school team and loved it. I started as a varsity cheerleader my freshman year. I also want to continue cheerleading in college.”

“Cheerleading has really contributed to her growth as a person,” she said. “Setting goals and being a part of a team are two of the life lessons she has gained from cheerleading. She has made life-long friendships both near and far also.”

The WHS Cheer Team was at Indiana University for cheerleading camp during the summer and tryouts are held there every year for the All-American team, for those showing exemplary skills in motion technique, dance and jumps.

“I tried out last year and made it and tried out again this year and made it. I decided this year I was going to go to London because I was looking forward to it ever since last year,” Bailey said, adding she plans to tryout again as a senior. “It’s a big group of girls from all across the country and we basically represent cheerleading in America – what cheerleading is.”

At WHS, Bailey is a leader on the squad and at the school according to Beth Ellis, WHS assistant cheerleading coach.

“She’s very talented, obviously being chosen as an All-American is definitely an honor,” she said.

Ellis said the squad has had several of its members named All-Americans but Lexie Castor, a 2014 graduate, was the first Shamrock to travel to London last year.

“I know Lexie’s trip had a definite impact on Jensen wanting to do that. There is a ripple effect,” Ellis said. “It definitely makes our younger girls work hard and try to achieve that All-American status when they have the chance as well … becoming an All-American and to be given that opportunity is definitely a once in a lifetime type of thing.” 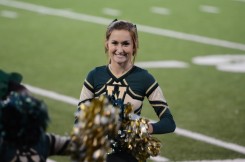 Favorite part of being a cheerleader: Being a spirit leader for my school and represent all of the awesome teams at my school. We also compete as a team and were sixth in state this year.

Personal quote: “If you look toward the sun you’ll never see the shadow.” Anytime I’m having a bad day, I think about it.

Pull quote: “Everything was just very fun and festive. It seems like a holiday that is much bigger than any other holiday in London.” – Jensen Bailey, Westfield High School junior