You are at:Home»Current in Westfield»Westfield runners place well at nationals 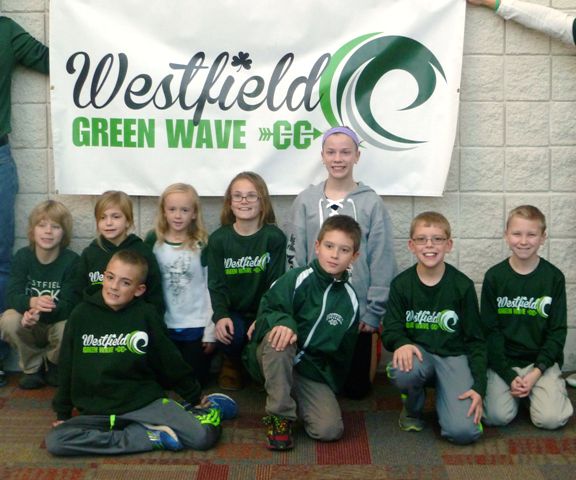 Nine athletes from the Westfield Green Wave, a Westfield Youth Sports, Inc. program, competed at the USATF Junior Olympics Cross Country National Championships in Myrtle Beach on Dec. 13. The athletes earned their spot in the race by qualifying at the Indiana Association Junior Olympics Meet, where Robyn Schemel was part of the second place 9- and 10-year-old girls team in team scoring, to continue on to the Region 7 Junior Olympics Meet which was held at Lewis University in Romeoville, IL. At the Region 7 meet at Lewis University in Romeoville, Ill. the 9- and 10-year-old boys team finished second overall in team scoring with Maddie Samreta and Sarah Coates finished eighth overall in their respective races. Coates also had previously won her age group at several meets this season including being crowned IYTA State Champion for her age group.

“The national championship experience included the opportunity to march in the opening ceremony on Friday along with a record setting number of athletes from around the country,” said Don Hahn, Westfield Youth Sports Cross Country program commissioner. “Over 3400 runners, ages 7-18, would compete the next day. Local teams Fishers Fire, Body in Training and Northside Saints also made up part of the more than 260 Indiana athletes at the meet.”

Hahn said the course, housed on the fairways of Whispering Pines Golf Course, was ideal for a fast race. “Our 8 and Under athletes ran a 2K course with slightly rolling terrain before entering a long, plush straight away to the finish chute,” he said. “Our athletes in the 9&10 and 11&12 age groups ran 3K. Emmeline Hahn, Noah Flynn, Josh Barnett and Owen Flynn all set personal records for running their fastest times ever.”

While setting his personal record, Hahn said Noah Flynn also set a new club record for 8 & under boys in a Junior Olympics event with his 8:51 finish time.

“All nine athletes ran hard and represented their team, the city of Westfield, and the state of Indiana well,” Hahn said.

The Westfield Green Wave is made up of kindergarten through sixth-grade kids in the Westfield Washington School District.