You are at:Home»Current in Carmel»Vignes preps for 2015 triathlons 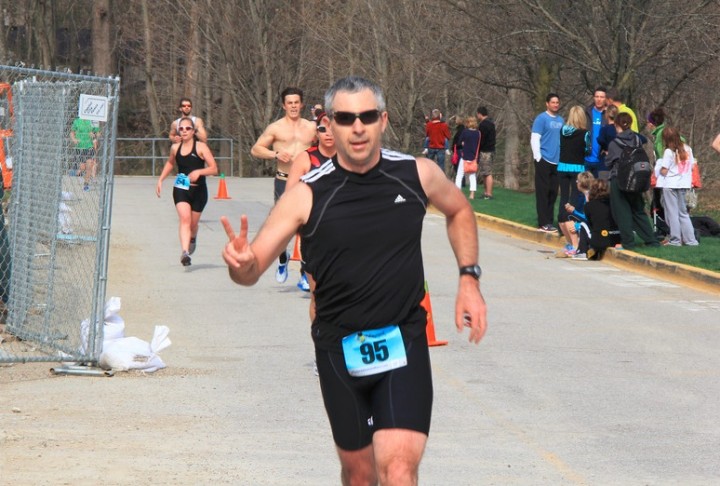 Running had primarily been David Vignes’ form of exercise.

Yet the France native was starting to get bored with that grind. So in 2000, a good friend from his job at Walt Disney World (in Orlando) asked him to go swimming with him and prepare to try a triathlon.

“I was miserable,” said Vignes of his first swimming session. “I had thought I have a pool in my house, that’s not a problem. But it’s not like playing with the kids in the pool. The first time I did 3,000 yards, I couldn’t get out of the pool I was just exhausted.”

Fourteen years later, Vignes, now a Carmel resident, has mastered the pool and is a veteran of more than 40 triathlons.

The Olympic (or standard) triathlon consists of a 1.5 kilometer (0.93 mile) swim, 40-kilometer bicycle ride (25-mile), 10-kilometer run (6.2 miles). Bicycling is Vignes’ best portion of the triathlon. It’s also the skill that comes the most naturally.

“When I was five years old, my parents didn’t take me to school, I would take my little bicycle on the sidewalk and go to school,” Vignes said. “When you live in France, you have to bicycle there is no way around it.”

Vignes is the executive vice president of enterprise optimization for KAR Auction Services in Carmel.

“The simple way to describe my job is to ensure every dollar we spend, we do it most efficiently,” Vignes said.

Preparing for the triathlons helps Vignes stay in good health physically and mentally.

When he’s training, he’s able to focus on something other than pressures at work.

“For me it’s a way to disconnect and almost relax,” Vignes said. “Even when physically tired, after exercising I feel very good.”

“Swimming is clearly my weaker sport,” he said. “But I’m enjoying it more and more. I will never be as good at swimming as I am bicycling. The more I train, the more I enjoy it.”

Vignes, who was injured part of this year and did just two triathlons, plans to do five triathlons in 2015, starting with the Carmel Sprint Triathlon (shorter distances than the standard triathlon). He plans to do two triathlons in Muncie, one in Eagle Creek Park in Indianapolis and one in downtown Indianapolis. Vignes estimates his sprint times are between 1 hour, 5 minutes to 1 hour, 10 minutes and for Olympic distances: 2 hours 45 minutes to 2 hours, 50 minutes.

Vignes has trained with Broad Ripple resident Hank Daunhauer, who was Vignes’ co-worker until January, for five years.

“He’s 52 and can absolutely keep up with me,” the 34-year-old Daunhauer said. “He’s pushed me a lot. He’s my favorite person to ride bikes with because it’s hard to find someone who is your exact speed. We’ve found a good pace together.”

Daunhauer said Vignes is very competitive with himself as many triathletes are. Vignes’ wife, Donna, goes with him to provide support and to drive home because he is exhausted at the conclusion.

“I’m always doing some kind of sport, wind surfing, running,” Vignes said. “In my family, that’s part of the DNA.”