You are at:Home»Current in Carmel»Carmel Community»January roundtable group gears up to learn about Lincoln 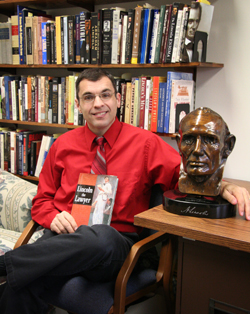 The Hamilton County Civil War Roundtable will host Dr. Brian Dirck to speak on the topic of “Lincoln in Indiana,” on Jan. 21.  He will cover Lincoln from the time he arrived in Indiana at the age of six, until he left at the age of twenty-one. These were some of the most important, informative years of his life, and the Professor will address just what he saw and did while a Hoosier: his upbringing, education (or lack thereof), relationships with his parents and neighbors, and some of the social, cultural and religious influences of his Indiana life on his later years as a politician and president.

His most recent writing, “Lincoln the Lawyer” explores the origins of Lincoln’s desire to practice law, his legal education, his partnerships with John Stuart, Stephen Logan, and William Herndon, and the maturation of his far-flung practice in the 1840s and 1850s. Brian Dirck provides a context for law as it was practiced in mid-century Illinois and evaluates Lincoln’s merits as an attorney by comparison with his peers. This fascinating history also examines Lincoln’s clientele, how he charged his clients, and how he addressed judge and jury, as well as his views on legal ethics and the supposition that he never defended a client he knew to be guilty.

Other books he has written or edited are “Lincoln & Davis: Imagining America, 1809-1865,”  “Waging War on Trial: A Handbook with Cases, Laws, and Documents,” “Lincoln Emancipated: The President and the Politics of Race;” “The Executive Branch of Federal Government: People, Process, and Politics; Lincoln the Lawyer” which won the Benjamin Barondess Award from the New York Civil War Roundtable; “Abraham Lincoln and White America” and “Lincoln and the Constitution”

Doors open at 7 p.m., Lily Theatre, Conner Prairie Interactive History Park, 13400 Allisonville Rd.  There is no charge for the event and guests are welcome.