You are at:Home»Current in Westfield»Behind the curtain

John Sampson made his theatrical debut in 1983. At the time he was working for McMahon Food Service and his friend, Bruce McMahon, was asked to audition for a signing role at The Belfry Theatre in Noblesville.

“He went back and forth so I asked him, ‘If I go with you will you audition?,’” Sampson recalled. “We sat through everyone else and they asked if there were any other people who wanted to audition. Bruce still didn’t want to go so I went up and sang an old song I knew and then he auditioned.”

The next day each was offered parts in “Under Two Flags.”

“I was just trying to help somebody else get into it,” Sampson said. “I wanted to help him get into the show. That was the whole thing.”

Helping others is a big part of Sampson’s life. Immediately prior to being interviewed, Sampson was assisting a sick and elderly woman living on 96th Street go to the grocery store because she didn’t have anyone else to help her. For three months he let his neighbors borrow his car because they didn’t have a reliable vehicle.

“I want to share what I can, the wealth I’ve been granted with,” he said.

After performing in many plays at The Belfry, Carmel Clay Players and in Lebanon, Main Street Players in Westfield asked him to build a set for one of their shows.

“I feel in love with the people,” Sampson said. “I started building more and more sets for them and being in their shows.”

Sampson, a lifelong Noblesville resident, is a Shamrock at heart.

“I helped with a set and now I’m part of the community, which is a loving community,” he said.

In 2008, Sampson ran for MSP board president and has served as its leader ever since.

“I’m active in all the activities within the City of Westfield to grow the name of Westfield Playhouse: chamber of commerce meetings, working with the parks department in Voices from the Past and Westfield in Lights. I’ll do anything to help Westfield Playhouse grow in the community,” he said. “Thankfully, we’ve been blessed. The city depends on us and backs us 100 percent.”

“It’s like anyone else, you get positive feedback and someone says ‘good job’ and it drives you to do it again and try to make it better,” he said.

Sampson was won best set design four times (nominated six times) at the Encore Awards which honors the best in community theater in Central Indiana. He also has been nominated for two acting awards and a best lighting design. Most recently, Sampson received the 2014 Mitty Award for Most Impressive Set Design for “God’s Favorite” from blogger Ken Klingenmeier. Of the 26 shows that Klingenmeier reviewed this past year, he wrote “Master carpenter John Sampson’s stagecraft is also to be applauded.”

As the arts culture continues to gain momentum within the city, Sampson is playing a vital role in the process.

“John Sampson has been pivotal in Westfield’s performing arts,” Mayor Andy Cook said. “His passion for the performing arts is felt in all of his projects from the Westfield Playhouse to Voices from the Past; John is instrumental in keeping the arts vibrant and alive in Westfield.”

Part of what Westfield Playhouse is doing with each new production is to have a different display of different art.

“We are an arts alliance and all the arts need to be expanded. We want to share our venue with the other arts in the city – paintings, sculpture, having intermissions with dancers and the high school choir,” Sampson said.

Sampson said the next play, “Home Games,” will include a visual arts display with a sculpture and photographs.

“Its several and all local Westfield artists,” Sampson said.

Sampson is part of the seven-member Westfield Arts Alliance, which is led by Ken Kingshill.

“The Westfield Arts Alliance is making arts known within the city – to establish studios, display work and helping artists find a venue,” he said. “We’re a facilitator to get more art into the community.”

During his years as board president, Sampson is proud of how the board has worked with its volunteer directors and actors and the quality of shows it has presented to the public.

“Westfield Playhouse now attracts the elite acting society within the area because of the quality productions we’ve put on the past five years. The performances here are better and better,” he said.

Cheryl Fesmire will direct “Home Games” at Westfield Playhouse, which opens Jan. 29. This is Fesmire’s first time being involved with a show in Westfield.

“I was here three years ago because I knew a young man and wanted to support him,” she said. “I thought the show was OK and have come back to support my friends (in shows here). Over the past three years I have seen a change in the production and performance value.”

What’s next for Westfield Playhouse

Thanks to matching façade grant from the City of Westfield, Sampson said the playhouse has new siding and other outside work will be celebrated with a community open house in April. The facility also is looking forward to starting to get some sort of new restrooms to replace the outdoor port-a-potties.

“We’re working even closer with the Westfield Parks and Recreation Dept. on a brand new production for the bicentennial year to be performed in the parks in Westfield,” Sampson said. “It will be written locally musically and story. It’s in the plans and will include the history of Westfield: where it was, where it comes from and where it is going.” 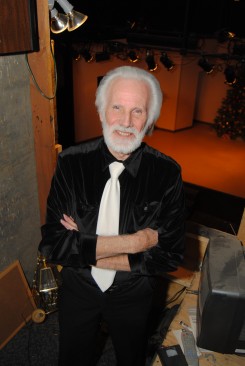 Favorite roles: John Dickinson in “1776,” Cpt. Von Trapp in “The Sound of Music” and the narrator in the lesser known “Grand Hotel.”

Show he would most like to act in or build a set for: We’d have to have a lot bigger stage but I’d love to do a semi-professional version of “Phantom of the Opera.” I also want to do “Cats” and build the set.