You are at:Home»Current in Carmel»Carmel Community»A century worth living: Carmel’s Bowen celebrates 100 years 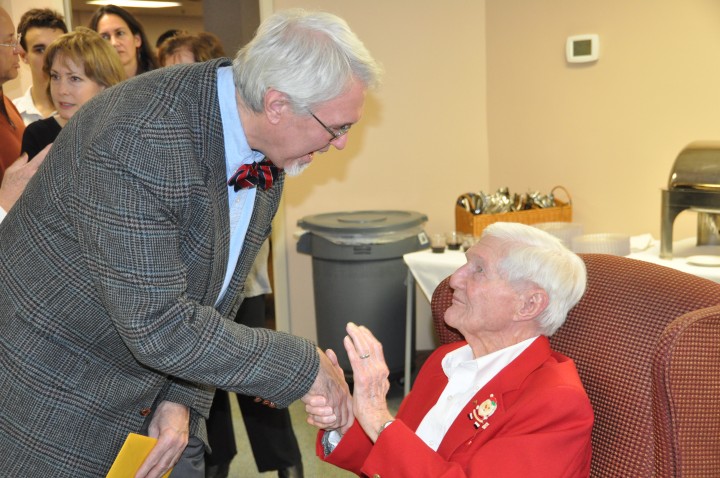 Bowen, seated, greets well-wishers at his birthday party on Dec. 26.

He has seen plenty in his century on earth. World wars, the Depression, Prohibition and its repeal, the Cold War, space race, Watergate, 9/11 and more. Through it all, J.B. Bowen held true to his core beliefs and constructed a life resumè and memory book as impressive as any around.

Bowen celebrated his 100th birthday Dec. 26 at Manor Care at Summer Trace in Carmel, where he has lived for nearly 13 years. Close to 200 family, friends, fellow residents, acquaintances and other well-wishers joined in to commemorate the occasion. The vastness of the array of people attending, in both ages and backgrounds, provided testament to the incredibly diverse life Bowen has led.

It’s a journey that’s seen the lifelong Indiana resident be a schoolteacher, musician, dancer, Navy medic, model, volunteer and more. And he’s far from done, evidenced by the fact he leads a stretching class three times a week for fellow Summer Trace residents, volunteers twice a week at St. Vincent Carmel Hospital and was named one of four 2014 Volunteers of the Year by the Hamilton County Council on Aging.

We should all hope to be as active, engaged and involved as Bowen is at 65 years old, much less 100.

“Someone asked me how I do this and it’s just the way I’ve been,” Bowen said at the birthday celebration that he concluded by singing three songs to guests. “I have a little saying every day to myself. I pray that my cup runneth over. I also say thank you, God, for all my blessings and forgive me for my sins.”

His father and a friend died in an auto accident less than three months before Jesse Batman “J.B.” Bowen was born in rural Ladoga in west central Indiana on Dec. 26, 1914. His mother remarried when he was 5 and J.B. grew up in Danville, where he was president of the 1933 high school senior class. Along the way, he cultivated tap dancing and musical talents. He choreographed numerous shows in his one year at Indiana University, where one review tabbed him the “boy with the cyclone feet.”

Bowen returned to Danville to attend Central Normal College (which later became Canterbury College before closing in the 1950s), earning an education degree in 1938 that led to nearly four decades as a beloved schoolteacher. He served as a Navy medic in the Pacific during World War II, also becoming part of the U.S. Naval Hospital Blue Jackets band that played for dignitaries such as Eleanor Roosevelt and Adm. William Halsey.

After the war, he met his eventual wife Ruth, who served as a surgical nurse in Europe during the conflict.

They were married in 1949 and had two children, remaining in Danville while J.B. taught mainly for Wayne Township schools on Indianapolis’ west side.

He remained active on the music scene, too. Bowen’s bands played in swanky Indianapolis places like the Columbia Club and old Claypool and Severin hotels. He lights up today when thinking of those days.

“I miss that more than teaching,” he admitted. “If I could stand behind a mic with that old tenor sax again and see all these people dancing, oh, it would be great.”

When J.B. retired from teaching in 1982, he began volunteering at the Indianapolis Artsgarden, Riley Hospital for Children, Indianapolis Repertory Theatre and Indianapolis City Center (an early version of the city’s convention and visitors bureau), among others. In the three decades since, he has given time to nearly 20 organizations, heeding his own creed: “If you retire, do something. Get off your fanny.”

He moved to downtown Indy to become more involved in volunteering after Ruth died in 1987. He also became a successful senior model on the side, appearing in eight national magazine ads. He moved to Summer Trace in 2001 and remains in an independent apartment. He goes out of his way to be active and a friendly face in the senior community.

It was Bowen who approached Bremmer with the idea to teach the stretching classes. “I said I can do that,” he recalled. Giving back to his home community is part of Bowen’s fabric, said his daughter, Betsy Denis.

“He’s always had that ethic that you go out and you do and you give and you’re involved and connected,” said Denis, who now lives in New York State. Her brother, Brad Bowen, lives in Carmel with his family. In all, J.B. has four grandsons.

As for J.B.’s secret to longevity, his daughter said it’s a combination of factors.

“He’s very optimistic, he is a man of faith, he has a sense of humor,” Denis said. “He exercises but his diet is everything in moderation. He has some red wine and some dark chocolate just about every day. And I think good genes.”