You are at:Home»Current in Fishers»New building brings businesses to downtown Fishers 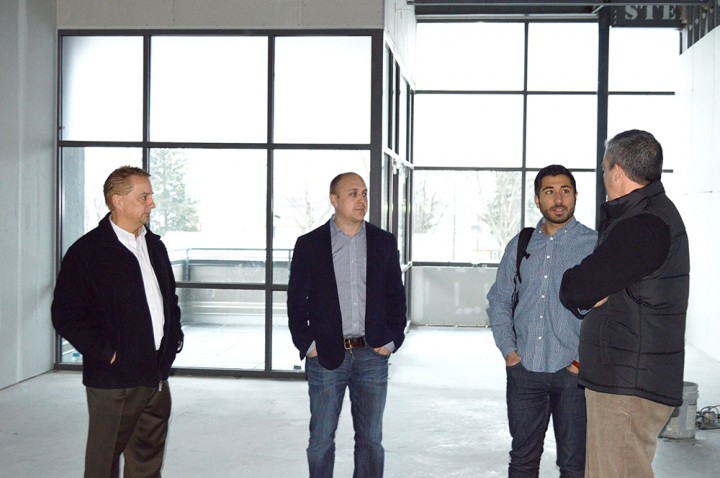 Fishers is master leasing the second floor of the building in order to lease space to small, high-growth companies in need of short lease terms. The owners of Memory Ventures and Bluebridge found the space appealing for growing their businesses.

“I own and run a company called Memory Ventures. We wanted to accomplish a couple things by relocating. We wanted to move out of California given cost of living and the costs of business environment to a pro-business environment,” said Memory Ventures CEO, Anderson Schoenrock. “And from an operational logistics standpoint, it made sense to be in the middle of the country.”

Memory Ventures is comprised of eight direct-to-consumer brands that help consumers preserve and share memories by digitizing media, including photos, slides and artwork.

Schoenrock explored other states, but settled on Indiana and then honed in on Fishers. The Meyer Najem building will be our initial footprint in Fishers. We’re taking on a short-term lease, and as we grow our business, we will relocate to a bigger facility,” Schoenrock said. Memory Ventures plans to add 120-130 jobs over the next five years, including marketing and sales positions.

“The ability to come into a building as we are getting ourselves off the ground really helped our decision process to move to Fishers,” said Schoenrock.

Schoenrock and his family have relocated. “We’re excited to get settled in. My overarching impression of living in Fishers versus living in Santa Monica, California is life is just easier here. The cost of living is much more reasonable. We bought a really nice house for about half of the price of our townhouse in Santa Monica,” he said.

Bluebridge founder Santiago Jaramillo started his business in his dorm room at Indiana Wesleyan University and was the first member of the co-workspace, Launch, in Fishers in 2012. Bluebridge creates apps for mobile devices. Its growing client list includes, churches, colleges and tourism entities.  “We’re growing out of our current space, and we wanted to stay in central Indiana. We looked at downtown Indy, Broad Ripple and south Carmel, but we liked Fishers. After evaluating options, we thought that having our home right next to Launch Fishers would help us gain perspective as to how far we’ve come,” said Jaramillo. Bluebridge plans to expand further, adding jobs for developers, marketing and sales positions, and customer support representatives. “We wanted a unique environment to fit our brand and culture so that we can attract top talent,” he said.