You are at:Home»Current in Carmel»Like father, like son: Ryan Cline takes the court at Carmel High School 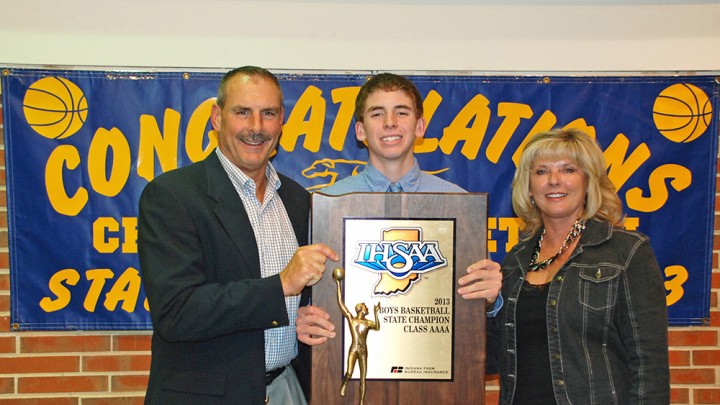 “I would imagine he played more like a junkyard dog — tough and mean,” Heady said. “I think some of that has rubbed off on Ryan a little bit.”

That wasn’t always the case. Ryan is a bit more laid-back in nature than his dad, who coached him in Carmel Pups and during summers in AAU.

“The aggressiveness is starting to come out, especially in practice,” Ryan said. “If we’re not getting stops in practice. I’ll yell and scream and get on them. If someone gets physical with me, I’ll get physical with them. It’s kind of genetic. But I think (the intensity) came over time. Knowing I have to be more physical to play at the level.”

Although Mike admitted their demeanors differ, he said Ryan’s coolness has one benefit.

Shooting is how Ryan built his reputation. However, becoming a more well-rounded player is the reason why the Carmel senior guard has signed with Purdue and is considered one of the leading candidates for Indiana’s Mr. Basketball. Ryan is averaging 20 points, shooting 45 percent from 3-point range and 4.3 assists for the Greyhounds (5-1).

“It’s not like he was a top 150 (nationally) recruit as a sophomore,” Heady said. “When you talk about Mr. Basketball- level kids, those are kids that usually were all highly rated coming up. That’s not the deal with Ryan. He’s a kid that has had to work to get where he is.”

It took longer hours in the weight room. Ryan is now 6-foot-5 and 190 pounds, after adding 20 pounds in the last year.

“Getting stronger in the weight room increased my ability to drive the ball and make plays for my teammates,” Ryan said. “Getting to the basket, creating contact and finishing, you can’t do it without being athletic.”

The added strength has boosted his defensive play. Heady said that was a weakness two years ago.

Purdue coach Matt Painter admitted he began keeping an eye on Ryan because of his ability to shoot.

“He’s somebody where you always have to know where he is on the court at all times,” Painter said. “Our goal as a staff is to make him a great player at Purdue. He’s already a great shooter. Coach Heady has done a really good job with him and Ryan has put in a lot of time on his own to get bigger, get stronger and to work on his game.”

During Carmel’s run to its second consecutive state title in 2013, Ryan was primarily a spot-up shooter and seldom had to handle the ball. That changed last season as he had to take on point guard duties.

“The thing that I think that has helped him even though I don’t believe he’s a true point guard is the fact that he’s had to play the point,” Painter said. “Anytime you have to play the point, you have to be accountable. You have to know what the coach wants. You have to take care of the basketball. You get trapped and pressed. You get challenged in a lot of different areas that you don’t when you’re the (shooting guard).”

Mike said the experience has helped his ball handling and decision-making.

“It will help him down the road too to help him get his own shot,” Mike said.