You are at:Home»Current in Westfield»Driving forward 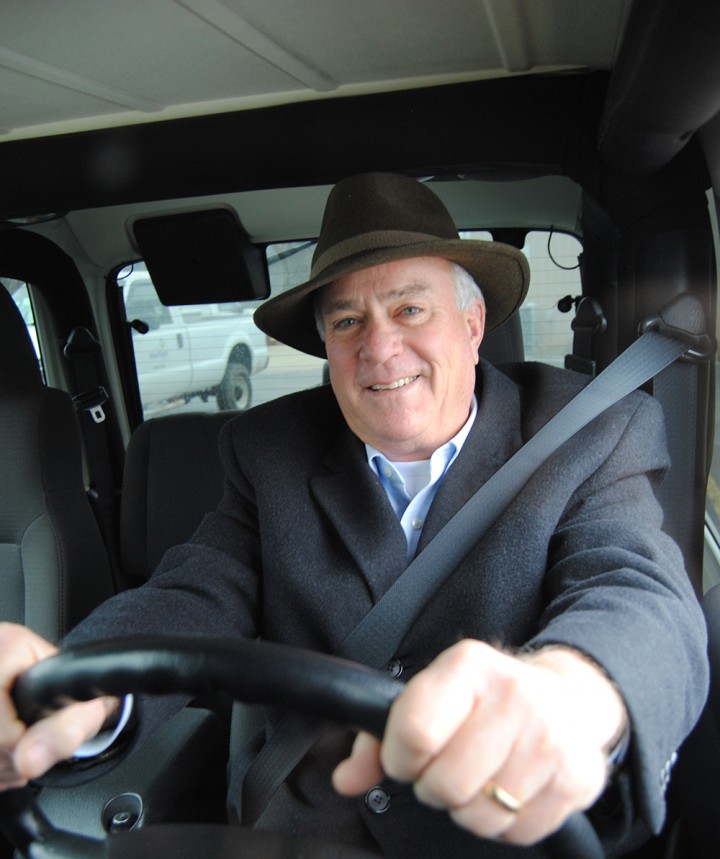 U.S. 31 is just one construction proj-
ect Mayor Andy Cook and Westfield residents will face in 2015 as the city prepares for continued growth and prosperity. (Photo by Robert Herrington)

“Building community, connecting families” is the theme the City of Westfield is using in 2015. The coming year also serves as a crossroads for Westfield as major construction takes place throughout the city and the fruits of years of labor come to bear.

“Really it is the first full year of implementation of long-term plans,” Mayor Andy Cook said. “Finally we are starting to see financial results from our investments. Now what we have to do is continue the trend of attracting families.”

What should residents be aware of in 2015? 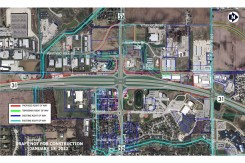 U.S. 31 – After four years of construction, 2015 will be the final year motorists deal with traffic issues on U.S. 31; however, the focus for the year will be focused on the most driven intersection – U.S. 31 and U.S. 32. “I have full faith that INDOT will be finished by January 2016. As far along as they are, I think they will make it,” Cook said. “Relatively speaking, from a traffic standpoint it’s gone quite well.”

Grand Park – The sports complex officially opened in June but fields opened in March. City officials estimate that the inaugural year had 910,000 visits. As the city prepares for its second year, Cook said it will be further refining the park’s business plan with its two stakeholders (Indiana Bulls and Indiana Sports Properties).

“With a year under our belt it’s time to adjust contracts to better reflect what’s going on out there,” he said.

Cook said one aspect they didn’t plan for the amount of softball interest the complex would draw.

“That was one where we underestimated,” he said.

To rectify that problem, the city, Westfield Washington Schools and Indiana Bulls are working to partner and build additional softball facilities at Monon Trail Elementary, which is located near Grand Park.

In 2015, Westfield will host two major tournaments through Indiana Fire Junior with each having 450 teams. Cook said those tournaments will be the first to utilize all 31 soccer fields at Grand Park.

“These are two of the largest soccer tourneys held in the entire country,” Cook said, adding the number of visitors will be 20,000 to 25,000 or more than half of the population in Westfield.

Hospitality – Cook said the city is taking advantage of U.S. 31 and Grand Park to develop its hospitality industry and relocate businesses.

“That’s really where our main emphasis will be to continue to develop Westfield as the top destination for families,” he said. “Rhonda’s (Daly) working hard with hospitality people up and down the corridor to help them take advantage of Grand Park and utilize the (U.S.) 31 freeway.”

Cook said this year’s goal is to professionally approach food, lodging and entertainment businesses about investing in Westfield.

“There will be more amenities,” he said. “Grand Park caters to three tiers of commercial growth: the hospitality industry, sports-related industries and hometown businesses that like what they see and want to be a part of Westfield.”

Cook added that without going into details, a sports medicine announcement will be made in the near future.

Chatham Hills – The golf course/residential property, similar to Bridgewater, will be built by Henke Development Group. Homes will begin being built this year. When completed, Cook said the project increases the city’s assessed value by $350 million. “When it’s completed in approximately 10 years, it’ll be huge,” he said. “It won’t be unlike Bridgewater which was 25 percent of the city’s assessed value years ago.” 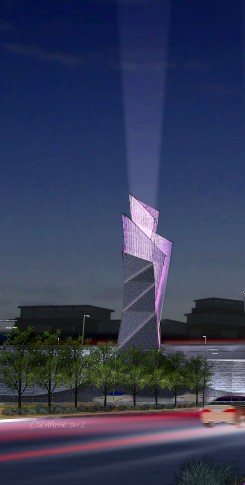 U.S. 31 landmarks – The debate over the U.S. 31 and 32 landmarks caused officials to halt the project earlier this year. “We will revisit the landmarks (in 2015),” Cook said, adding the monuments have been put out to an international design competition. He said the project will be redesigned with a “more cohesive” look for Westfield. Cook said discussion on the landmarks since its tabling has “been very positive” from the public and he looks forward to future discussions on the new design.

● The ripple effect of Grand Park has created three projects since it opened.

Private developers have already committed to build two indoor facilities: a $24 million soccer/lacrosse/football facility to open in 2015 and a $6 million basketball/volleyball facility.

“What we are doing here with city amenities is creating a very unique park that we hope in turn creates a very profitable business environment that the private sector wants to invest in. And that’s exactly what we are beginning to see here,” Cook said. “We do have a few restaurants and quite a few shops and entertainment venues saying ‘How do we get involved?’”

● The longtime vacant Verizon building at 19845 U.S. 31 will turn into an economic revitalization area as part of the plan for Carrington Mortgage Services to expand its business in Westfield. By 2019, the company plans to create as many as 360 new high-earning jobs as customer service representatives, servicing specialists, sales and marketing professionals and underwriters. Carrington Mortgage will invest more than $3 million in the building to accommodate the company’s needs. The California-based company will move into the building sometime within the first quarter of 2015.

● The TGI Fridays building in Village Park Plaza will be demolished and a Huntington Bank will be built at the site.

● 191st Street is nearing completion of accessory and access roads.

● 196th Street will remain as a signal intersection until the entire construction of the road is completed.

● Grand Park Boulevard is under construction at 186th Street where it “T’s” into the new Wheeler Road.

● Other projects include roundabouts at Spring Mill and Oak Ridge roads and the second half of Wheeler Road extension.

● By the end of 2015, Cook said the city will have spent $20 million on infrastructure upgrades from funds of the utility sale proceeds. 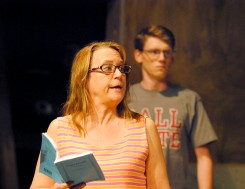 ● The Westfield Playhouse is two shows into its 2014-2015 season. Upcoming performances for this season include: “Home Games” by Tom Ziegler, Jan. 30 through Feb. 15; “The Civil War” by Frank Wildhorn, Gregory Boyd and Jack Murphy, April 3 through 19; “Deathtrap,” May 29 through June 14; and the youth production of “Peter Pan and Wendy,” July 29 through Aug. 2.

● Grand Junction Plaza – The city plans to take the year to construct the Mill Street extension and finalize construction documents. Grand Junction Plaza project began as a citizen-driven effort to revitalize Westfield through downtown development. It will be a multi-use meeting place for the community south of U.S. 32 adjacent to Union Street. Based on preliminary estimates, Cook said the project has a $25 million price tag. The official name of the area also will be made in 2015.

● By the end of 2015, Monon Trail will be extended north to Monon Trail Elementary. The city has received funding to build a pedestrian bridge over Ind. 32 but Cook said that will not likely happen until 2017.

Did you know that in 2015, the federal government is likely to start taxing online purchases? According to a study done by Columbia University: “Many online merchants that do not collect sales tax have a pricing advantage over traditional stores that must, under law, collect sales tax. Online shoppers are supposed to submit payment for tax due, but almost no one does. As a result, many online purchases are tax-free and cheaper than in-store purchases.” Although the bill to stop this was stalled in the House of Representatives in July, it will be revisited in 2015.

Indiana municipalities could no longer annex property owners against their will if lawmakers follow recommendations of a study committee when they reconvene in January. A panel has recommended several changes to the state’s annexation code, including eliminating involuntary annexations and lowering the percentage of homeowners required for a remonstrance. Under the proposal, annexations could occur only if 51 percent or more of affected property owners agree. The percentage required to fight annexation is recommended to decrease to 51 percent for a remonstrance, compared with 65 percent currently.

In the third quarter of 2014, the city of Westfield issued permits worth an estimated value of improvements of $59.7 million. This year set new records for the city in number of advisory plan commission filings, single-family new home starts and total value of permits issued. Companies creating or expanding their businesses this year in Westfield include:

CarDon Senior Living Community – The comprehensive senior living community is approximately 13 acres at the northeast corner of 146th Street and Ditch Road. The facility, which will have approximately 104 skilled nursing beds and 36 assisted living apartments, includes a theater, a beauty shop, activity rooms, a large kitchen and dining rooms, as well as a therapy gym for physical, occupational and speech therapy. Phase 1 is an approximate $16 million investment, creating 110 to 140 new jobs. The structure is approximately 117,500 square feet and construction is currently underway.

Sundown Gardens – The mixed use agritourism development is at the southwest corner of 186th Street and Spring Mill Road on approximately 16 acres. The project would allow for a mixed-use agritourism, garden and lawn center, nursery and commercial development.

The Shoppes at Grand Park Village

The Shoppes at Grand Park Village – A commercial/retail development located at the southeast corner of 186th Street and Grand Park Boulevard. Construction of a pair of two story commercial structures is anticipated in 2015 and the 20-acre Grand Park Village Lake is underway. The two-story building will be designed to contain restaurants and commercial businesses. The overall layout includes a Cape-Cod design with a clock tower and exterior boardwalk. Other amenities include a boardwalk, beach, restaurants, retail, office, medical, lodging, entertainment and residential.

Kroger Depot and Expansion – Located at the northeast corner of Spring Mill Road and 161st Street, demolition and redevelopment of the existing fueling station is anticipated this year. The renovation includes a new 10-gas pump center that will be built north of the current four-pump station. In addition, construction of a planned expansion to the existing Kroger facility is anticipated in 2015. Total expansion is approximately 13,800 square feet. The project will be the first railroad-themed architecture in the Spring Mill Station Economic Development area.

Chatham Hills – A 750-acre+/- mixed-use golf course development generally extending from the southwest corner of State Highway 38 and US Highway 31 to 199th Street and the Monon Trail. Chatham Hills will feature a Pete Dye-designed 18-hole championship course and a mix of both single family and multi-family residential as well as commercial and recreational uses. Phase 1 residential section that includes 196 lots is currently being platted and expected to start site and home construction in 2015. The championship course and executive course are under construction.

Derby Ridge – The 55-acre development on the northeast corner of 161st Street and Ditch Road will have 82 lots. The first section of development is expected to start construction in 2015.

Harmony – A 277-acre mixed-use development generally located on the west side of Ditch Road between 146th and 156th streets will include a mix of single family and multi-family residential as well as commercial. A total of 710 single-family lots are permitted. Construction of single family homes is currently underway in sections 1 and 2. 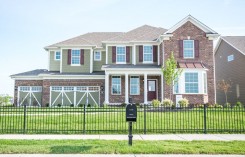