You are at:Home»Current in Fishers»Brixx opening in Fishers 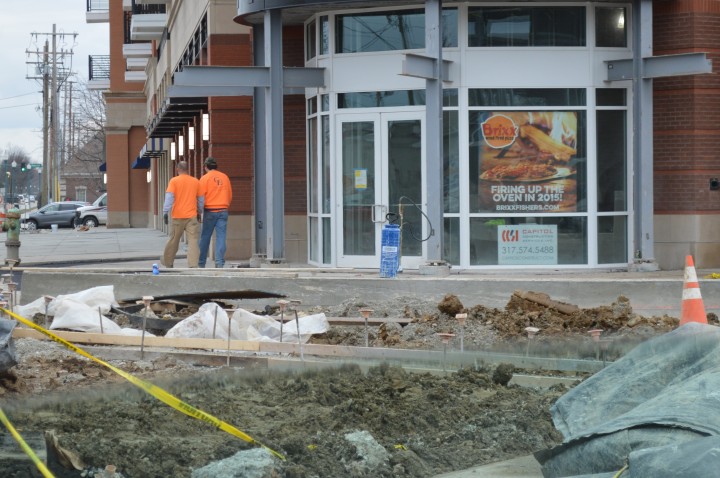 Dr. Thomas Lessaris became a fan of Brixx Wood Fired Pizza the first time he went to one several years ago in Charlotte, N.C.

“I got familiar with the concept of it because we live here and we frequent the place,” Lessaris said. “So that’s how I got the idea of franchising it. Their flavor and food are phenomenal. They make everything by hand. They hand make their own mozzarella. They’re in there early making their pizza dough. They cook all their chickens in the oven and cut them up.”

The pizza restaurant started in the Charlotte 16 years ago and is now being franchised all over the nation. Lessaris, 52, who has his physician’s office in Huntersville and lives in Belmont, moved to North Carolina in 2000. Lessaris and his partners are opening a Brixx in The Depot in Nickel Plate District in Fishers and a second restaurant in Champaign, Ill. The Depot is a mixed-use building with apartments, retail and parking.

“We hope to open the Fishers one in late February and the Champaign one in June,” Lessaris said.

His first cousin Jim Lessaris will serve as the general manager and is one of three co-owners.

“He’ll be living in the Depot. He isn’t quite there yet,” Tom Lessaris said.

Dr. Tom Scaggs, the other co-owner, is from Champaign as well.

“We wanted to open one in Indianapolis and Fishers is up-and-coming,” Lessaris said. “Early on in The Depot project, Keith Stark, our broker, who lives in Fishers, said The Depot is going to be great. So we went right to it. It seemed like a great location. Fishers is phenomenal.”

Jim is the owner with the restaurant experience.

“He’s been lifelong in the restaurant business,” Thomas Lessaris said. “He had his own business and then was with Ruby Tuesday, Buffalo Wild Wings and TGI Fridays. He’s the operator. Tom and I are investing and support.”

Thomas Lessaris is convinced Fishers residents will be impressed with Brixx.

“They do everything the right way,” he said.  “The taste is much better than you get in average restaurants nowadays. It’s a good concept. The food is great. People are happy. It’s a laid-back atmosphere.”

Along with pizza, the restaurant serves salads, soups, sandwiches and pasta.