You are at:Home»Current in Fishers»Obituary: Lucille V. Noblitt 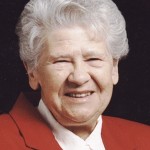 Lucille spent her entire life in Fall Creek Twp., Hamilton County. She received her early education in a 2-room brick schoolhouse, then graduated with academic honors from Noblesville High School in 1941. Lucille attended Indiana University, where she was a member of Alpha Xi Delta Sorority. She graduated from Indiana Central College (University of Indianapolis) in 1950 with a Bachelor of Arts degree. Lucille attended Butler University and received a master’s degree from Ball State University.

Lucille served her community in many ways: She was a teacher, a principal and served on the Hamilton Southeastern School Board from 1980 to 1988 and the Hamilton County Library Board. Lucille was a member of the Order of Eastern Star where she served as worthy matron, the Circle K Kiwanis, DAR, Hamilton County Historical Society, American Association of University Women, Indiana Professional Educators and National Council of Teachers of English. She was honored as the Alumni of the Year by the Noblesville High School Alumni Association. Lucille was a lifelong member of Bethlehem United Methodist Church, and received a Sagamore of the Wabash in 1994.

She is survived by her children, Charlene Rockhold of Noblesville, and Robert (April) Noblitt of Sarasota, FL; step-daughter, Yvonne Kinney of South Carolina; son-in-law, Dean Rickenbach; grandchildren and one great-granddaughter.