You are at:Home»Current in Fishers»Craft brewery boasts family ties 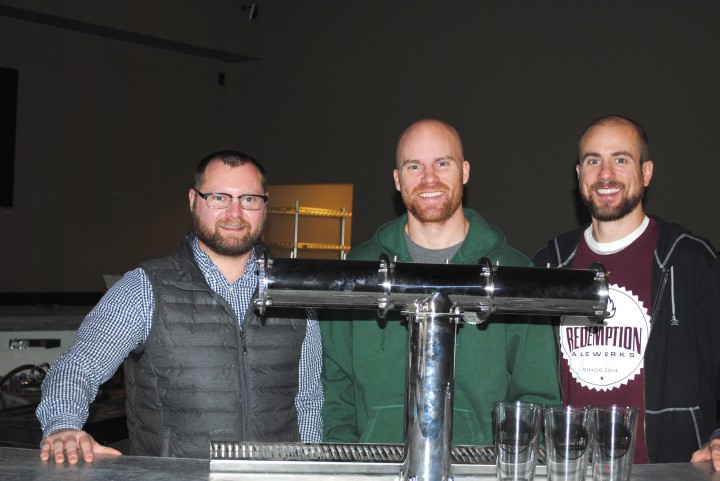 It’s not quite a full family affair but it’s close.

Ben Smith and his first cousin Josh are the co-owners of Redemption Alewerks, which opened this week on 7035 E. 96th St. on the northeast side of Indianapolis (near Fishers). The brewpub held an opening for family and friends on Dec. 19-20.

“Cameron and Brandon approached Josh and I with the opportunity (about a year ago) and we said ‘Absolutely, we’ll put money behind it and do the business side of things,’” said Ben, who is sales broker.

Ben said he believes the thirst is there for more craft breweries.

“Indianapolis is a big small city,” Ben said. “We did a fair amount of market research. Michigan is the mecca of microbrews and brewpubs. We went up to Traverse City (Mich.) six to eight months ago to get a feel for what Cameron’s vision was for this place. Traverse City has seven brewpubs in a mile-and-a-half area downtown and it’s wall-to-wall people night and day.”

“Cameron has been successful in this business and Brandon has experience so we were comfortable knowing we had those guys behind to run the brewery,” Josh said. “Obviously Brandon and Ben are family so I thought doing something with family would be fun. I think we have a good core group of people with good ideas and a unique concept for the area.”

The craft brewery, which has a seating capacity for approximately 120, plans to employ five bartenders and 25 waiters and waitresses.

“We’ve guested brewed at other houses so we will have our brew just not on site,” Ben said. “We’ll have three staples when we open as well as other guest taps. Ultimately once we’re up and full functional, we’ll have six staples.”

Ben said there are 16 tap lines so the craft brewery will have six staples and six seasonal rotations. “We have some guest taps devoted to cider and the rest will be guest taps from Indiana and Michigan,” he said.

There will be craft cocktails available as well. Brunch will be served on Saturday and Sunday.

“It will be more of a comfortable lounge feel than a sports bar,” Ben said.