You are at:Home»Current in Zionsville»Glenda McCabe:  36 years as The Lady Dentist 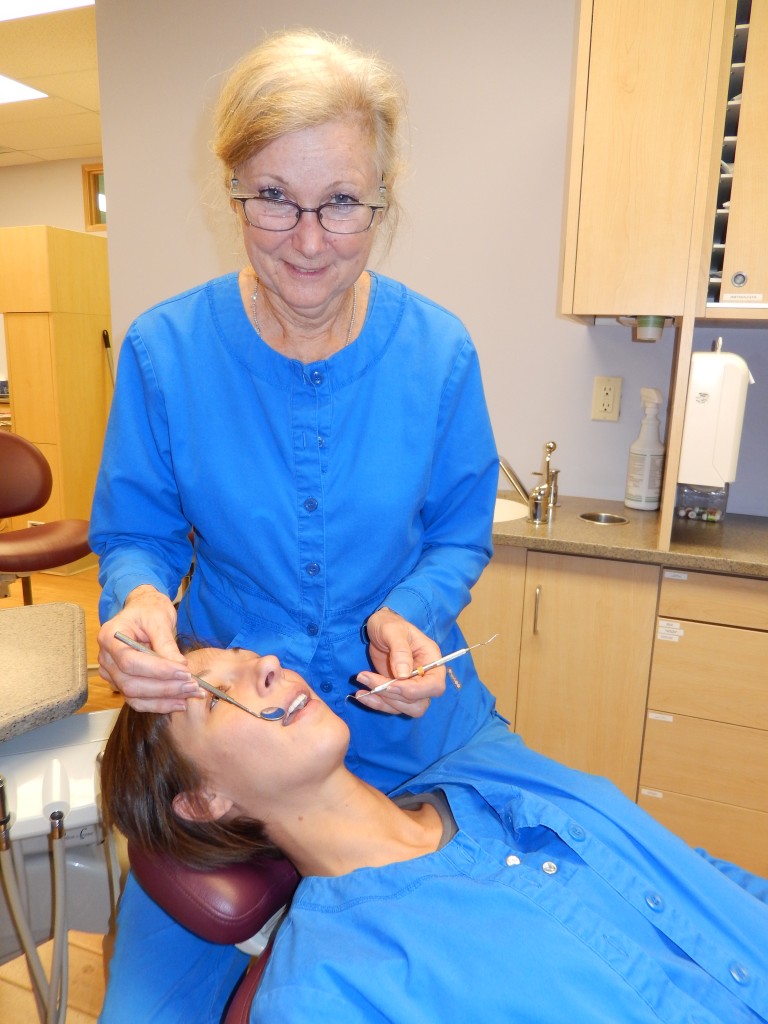 Glenda McCabe works on a patient. (Photo by Donna Monday)

It was 1978. The BeeGees were “Stayin’ Alive, ” and Debbie Boone was lighting up somebody’s life. Colony Woods sported about a dozen houses in all. Raintree wasn’t yet finished, and Sugarbush had not begun.

“Why Zionsville?” I asked her.

“Well,” she said. “Dennis [her husband]was working downtown at Indiana Bell, and we needed an easy commute.”

The first order of business was business itself. She and Dennis were off to Farmers State Bank at the intersection of Main and Oak Street. Tom Gruhl was the bank president.

“I said I was interested in starting a dental practice in Zionsville, ” she said. “Tom took us in his car all around Zionsville.”

Later, back at the bank, Glenda quotes Tom as saying: “‘I can’t believe I am lending money to a lady dentist.'”

Glenda then added fuel to the fire.

She got the money, and the town got a new dentist. Needless to say, she did not  “go under.”

If she was the first woman dentist, I was an early patient. She’d barely hung out her shingle when she realized the phonebook had her phone number wrong. She needed an ad –with the correct phone number–every week for the next year, so she called the local paper I was editing.

Since I needed a crown for a tooth, the publisher, she and I made a deal. She got the ads; I got the gold crown. Thirty-six years later the crown is still good, which is why I’m still her patient, even if she does only work one day a week.

She recently sold her practice to Dr. Darrin Combs. She now refers to herself as “just an employee.”

I asked this “just an employee” what was the most bizarre story she could tell about a dental emergency. She laughed at remembering.

“A daughter of a friend called and said she thought there was something wrong with her two front teeth,” she said.

“Are they broken?” asked Glenda.

A sheep she was loading had butted her in the mouth, and the teeth were bleeding inside.

The “kicker,” if you’ll pardon the pun, is that the patient sold her sheep to pay for her dental work.

It was just another day at the office.