You are at:Home»Current in Westfield»Westfield’s Stidham serving aboard USS Makin Island 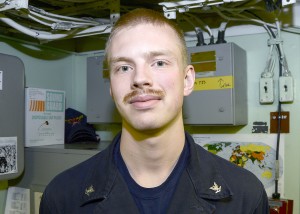 Electronics Technician 3rd Class Levi Stidham graduated from Westfield High School in 2012 and enlisted into the Navy two months later on Aug. 9. He is currently stationed aboard the amphibious assault ship USS Makin Island (LHD 8), which is deployed to the U.S. 5th Fleet area of responsibility.

“I was inspired by my grandfather, who was a Radioman 3rd Class in the Navy around the end of World War II,” said Stidham.

Makin Island is Stidham’s first command where he is assigned to the ship’s combat systems department. As an electronics technician, he is responsible for helping maintain the ship’s exterior communications systems.

“I like my job because every time we have a trouble call, it’s like trying to solve a puzzle,” said Stidham. “It’s cool when you’ve been troubleshooting something for a while and finally figure out what the issue was.”

Stidham is serving on his first deployment, contributing to Makin Island’s mission of helping to promote peace and freedom of the seas in support of the Navy’s maritime strategy. Makin Island has conducted port visits to Hong Kong and Singapore, where Stidham and other sailors and Marines were able to sightsee and participate in tours and community relations projects.

“Hong Kong was my favorite,” said Stidham. “The scenery was beautiful and it was really cool to see the big Buddha statue. That’s something I never thought I’d see.”

While deployed, Stidham set personal goals to earn his enlisted surface warfare specialist and enlisted aviation warfare specialist qualifications. “I’m already qualified in everything else up to my rank, so now I just want to get my ESWS and EAWS and make it home safely,” he said.

Stidham said he is undecided on whether he’ll make a career out of the Navy. As he continues to serve on active duty, Stidham is taking advantage of the Navy College Program for Afloat College Education, earning college credits at sea.

“My goal is to continue to grow as a person and especially as a leader expanding my knowledge in general,” said Stidham.