You are at:Home»Current in Carmel»Obituary: Diane F. Murray 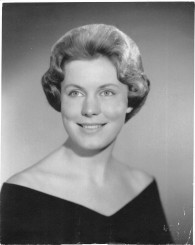 Diane was born in Anderson, to Louis and Alice Murray. She earned a Master’s and Bachelor’s degree in Elementary Education from Indiana University. During her time in IU, Diane became a member of Gamma Phi Beta and Kappa Kappa Kappa Sororities.

Diane was an Elementary teacher in Lawrence Township Schools from 1963 until her retirement in 1994. She had a life-long interest in US history, reading and travel.

In addition to her parents, Diane was preceded in death by her brother, Daniel Murray.

A Celebration of Diane’s Life was held in Leppert Mortuary-Carmel Nov. 28. Private family inurnment will occur at a later date in Maplewood Cemetery, Anderson.

In lieu of flowers, memorial gifts are suggested to the National Parkinson’s Foundation.

Thoughts may be shared with the Murray family by visiting: www.leppertmortuary.com