You are at:Home»Current in Fishers»Fishers new controller Oscar Gutierrez 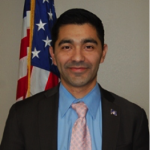 The Town of Fishers has hired Oscar Gutierrez to fill the new position of controller, a position required by state law for the governing of second-class cities, cities with a population between 35,000 and 599,000 residents.

“The main responsibilities of a controller are similar to that of treasurer,” said Gutierrez. “All of the city’s finances run through the controller’s office, such as payroll and paying vendors. Also revenues such as utility billing.”

Gutierrez most recently served as the controller for the City of Lawrence, preceded by experience in financial management with the Department of Defense—where he was awarded the Joint Service Commendation Medal and the Joint Service Achievement Medal for his contributions. In addition, he is a non-commissioned officer in the Army Reserves with eight years of active duty and 12 years of continued service.

“I’m an active reservist,” said Gutierrez. “I continue to be very involved in the military—I have a deep passion for that.”

Gutierrez is looking forward to working with Mayor-elect Scott Fadness.

“Fishers has a reputation for sound fiscal policy,” he said. “Scott Fadness is a mayor that I can relate to as far as trying to modernize processes that are in place.”

Gutierrez explained that several factors lead him to the job.

“It’s the strong position of Fishers, the leadership and wanting to do more for Fishers,” he said.

Gutierrez said that one mistake smaller communities make is not effectively making the necessary moves when transitioning from a town to a city.

“Fishers will be one of the largest cities in the state, so we need to do business as a city,” he said.

Gutierrez thinks that good communication among departments is a key to success.

“We need to streamline communications and provide department heads with information to make the right decisions,” he said. “We also need to evaluate the controls that are in place to make sure that standards are up to what a city should look like.”

Gutierrez and his wife, Meghan, are looking forward to making Fishers their home and enjoying the amenities the community offers.