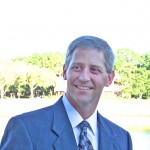 The former Carmel resident used that example as a guide in his campaign for mayor in Hilton Head Island, S.C.  Bennett won the run-off with the incumbent Mayor Drew Laughlin with 65 percent of the vote on Nov. 18. The margin of victory was a bit of a surprise because in the No. 4 vote forcing a runoff in the non-partisan race, Laughlin held a 42-41 percent lead over Bennett.

Bennett, who was sworn in on Dec. 2, had previously been serving on the Hilton Head planning commission since 2011and most recently was the chairman.

“I thought we were being reactive, which goes against my modus operandi,” Bennett said. “I thought we should be more proactive in economic development. We have to be more proactive about developing a master part for a large part of our community that is not currently master planned. We have to be more accountable and transparent in our government.”

Bennett said he had followed Mayor Brainard’s five-term tenure, which began in 1995.

“When he first ran many years ago he ran on where’s the center of town,” Bennett said. “The idea was ‘What’s the plan? What’s the vision for our community?’ He went about crafting a vision and working towards it. He’s largely responsible for Carmel being where it is today.  I thought we could learn from some of those lessons and bring them to Hilton Head.”

This was the first time Bennett, 48, had run for public office. Bennett, along with his wife and three children, had been spending summers at their Hilton Head home since 2003 and decided to make the full-time move from Carmel in 2009.

“We sold a bunch of our properties in Indiana just before the market crashing and we took that opportunity to move to Hilton Head and pursue the development of affordable housing in South Carolina,” Bennett said.

“I see a lot of that potential going untapped,” Bennett said. “I want to bring our community together and craft a vision for it.”

Bennett said he didn’t reach out to Brainard before running or during the campaign.

“To be honest, I considered myself a complete long shot,” Bennett said. “So I didn’t want to call Mayor Brainard and take up his time. As a campaign wore on, my message seemed to be resonating with the people of Hilton Head.”

Brainard said he wishes Bennett well in his new position.

“I appreciate his kind comments about our administration and Carmel’s success,” Brainard said. “It’s gratifying to think what we’ve done in Carmel may have an impact far beyond the borders of Indiana.”