You are at:Home»Current in Carmel»Carmel Community»Record-setting shelter dog finds a home 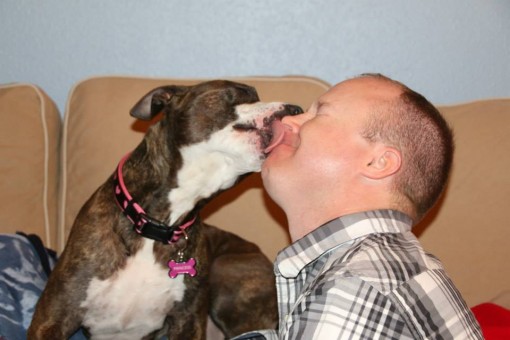 The dog set a record for the longest stay at the Humane Society of Hamilton County, but now that’s all over.

Cpt. Justin Growden of Fishers returned home after being deployed and inquired about finding a match through the Pets Healing Vets program.

The announcement was made at the shelter’s annual fundraiser, Tinsels and Tails, on Nov. 20 to cheers from the crowd.

“They do amazing things and have hearts of pure gold,” Growden said. “I can’t say thank you enough to the workers and volunteers that have helped. If you know of a veteran that may benefit from a companion animal, please pass this along to them.”

Rebecca Stevens, the shelter’s executive director, said they were so excited to finally find a home for Princess. The shelter had even launched a Facebook page and campaign to specifically find this dog a family.

Stevens said she hopes Princess can help Growden – a veteran who served in the Marine Corps – cope with post-traumatic stress disorder and a brain injury.

“No two souls have ever needed each other more,” the Human Society wrote on Facebook. “While Princess waited way too long… we have no doubt that her wait was worth it. Fairy tales do come true”

There was also talk at the fundraiser about land becoming available to help find a new, larger home for the animal shelter, but Stevens said an announcement isn’t ready on that just yet. Tinsel and Tails grossed a record $192,435 for the shelter. In 2013 the event raised about $110,000.