You are at:Home»Current in Carmel»Carmel Community»Poindexter files for Judge of Carmel City Court 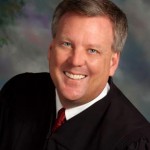 According to a statement from Poindexter, he has worked to provide the citizens of Carmel with a court where each individual litigant is assured that they will be treated fairly, impartially and that all proceedings are conducted in a respectful and dignified manner. Judge Poindexter is committed to continue serving the citizens of Carmel.

Judge Poindexter has been an active member of the City of Carmel community for more than 20 years. Poindexter serves on the board of directors for the Rotary Club of Carmel, Janus Developmental Services and The United Way of Hamilton County.  Poindexter lives in Carmel with his wife, Anne Hensley Poindexter, who is an attorney and a partner with the law firm Campbell Kyle Proffitt. Their daughter is a recent graduate of Carmel High School and is a freshman at the University of Kentucky.