You are at:Home»Night & Day»This holiday show is naughty and nice 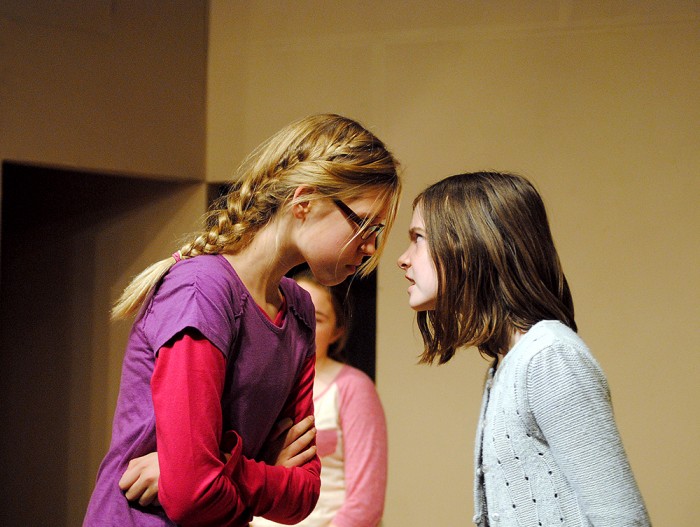 Beth Bradley (Leah Kerkhoff), left, and Alice Wendlekin (Audrey Duprey) get in a heated argument about the Herdmans behavior in “The Best Christmas Pageant Ever.”

“The show is wonderful for families and this is the time people do things as a family,” said director Bobbi Van Howe.

Van Howe was asked to fill in as director when the original person moved away because of her experience leading the Westfield Playhouse’s summer youth productions. Since this show includes mostly younger children, her past experiences have served her well.

“My secret with the show is to put parents in the cast,” she said. “Most of the kids in the cast have a parent or older sibling in the show. I try to make it a family thing, especially around Christmas.”

Van Howe said her cast is evenly split with actors she is familiar with and those new to the stage.

“Half I’ve known for years and the other half I’ve never seen before in my life,” she said. “One of my favorite things about the summer youth program is teaching them the skills of acting and teaching them a love of theater. It’s a win-win.”

The McConnells of Westfield had no idea they would share the stage together when they first came to tryouts.

“They brought their son to audition, I asked them to read and then they had parts,” Van Howe said.

Instead of driving their son, C.J., to rehearsals, Chris and Nikki McConnell of Westfield are acting alongside him.

“We haven’t been in a play since high school,” Chris said. “It’s been about 20 years since I’ve done this. … I didn’t think we’d have this much fun.”

“It’s been a real bonding experience for the three of us as a family,” Nikki said.

When the family isn’t at the playhouse, they rehearse lines together at home.

“I only have five lines. I help them out by reading other people’s lines,” C.J. said. “When I have to be angry at her and she gives me a face, I start to smile.”

“He taunts me on stage,” Nikki said.

The McConnells star as a couple struggling to put on a church Christmas pageant, faced with casting the Herdman kids, probably the most inventively awful kids in history. They lie, steal, smoke cigars, swear and hit small children. So no one is prepared when this outlaw family invades church one Sunday and decides to take over the annual Christmas pageant. None of the Herdmans has ever heard the Christmas story before and their interpretation of the tale has many people up in arms. But the mayhem and fun will make this year’s pageant the most unusual anyone has seen and, just possibly, the best one ever.

“My favorite part of it is it explains Christmas very well – what it really is and isn’t about,” Van Howe said. “It makes a big impact on my heart. … Every one of them is a juvenile delinquent, but they aren’t incapable of having compassion and realizing the Christmas story.”

“I love the story, how big bullies change and learn the real meaning of Christmas,” said Leah Kerkhoff, 11, who stars as Beth Bradley. “She’s able to be the narrator and able to step back and be in the play. She has a fun personality.”

Kerkhoff has been in seven plays, four at Westfield Playhouse. Joining her in the play is her little sister, Reece, who plays Gladys Herdman.

“I like her, she’s one of the worst children but then she turns out to be an angel,” Reece said.

Reece said portraying a problem child on stage “was hard at first.”

“When I got into it, it was pretty exciting,” she said.

The sisters previously performed together during the summer youth program’s one-act plays: “10 Ways to Survive the Zombie Apocalypse” and “The Seussification of Romeo and Juliet.”

“I enjoy seeing how she interprets the character and all of the ways she’s learning about theater compared to how I learned it when I was her age,” Leah said.

“Everybody gets to make their character their own,” Barrows said.

“The characters are hilarious and really fun to be with. It’s funny how clueless they are,” Duprey said.