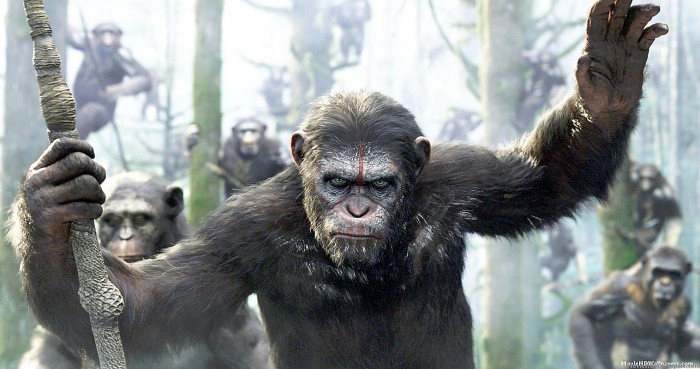 Technically, I’m not sure if “Dawn of the Planet of the Apes” is the sequel to the prequel to the “Apes” movies from the 1960 and ’70s, or what. But I do know it was the most entertaining movie I saw this summer.

The follow-up to “Rise of the Planet of the Apes” is set 10 years down the road, when humans have mostly died off due to disease and intelligent apes are now the Earth’s prime species. Represented entirely through computer animation, the chimps, gorillas, baboons, orangutans, etc. squint and snarl, bicker and bond, and also speak English when the mood strikes them.

Caesar (Andy Serkis) is the leader who championed the uprising against the humans, and now suspects they’re extinct. But then Marcus (Jason Clarke) shows up on the doorstep to their forest village with a band of other people in tow. After some convincing, Caesar reluctantly agrees to help them turn the power back on at the nearby hydroelectric dam, but it soon becomes clear that the coming conflict is unavoidable – both between and within species.

“Dawn” is a mix of soulful reflection and engaging sci-fi.